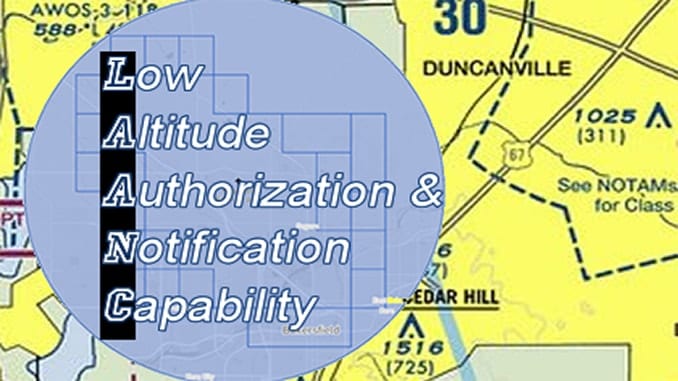 The march to integrate unmanned aircraft systems (UAS) into the National Airspace System (NAS) continues. In early March, the FAA announced that it was expanding beta testing of its automated Low Altitude Authorization and Notification Capability (LAANC), begun in November, to 300 air traffic facilities covering 500 airports beginning April 30. Final deployment of the system will begin on September 13.

Under FAR Part 107, UAS operators must secure prior approval to operate in any airspace under ATC control. Drone/UAS operators using LAANC can receive near real-time airspace authorizations, thus dramatically decreasing waits compared to manual authorizations, which can take days or even weeks. The automated system also allows air traffic controllers to see where planned drone operations will take place. Beginning April 16, the FAA also will consider agreements with additional entities to provide LAANC services. Currently, there are four providers—AirMap, Project Wing, Rockwell Collins, and Skyward. Applications must be made by May 16.

LAANC uses airspace data provided through UAS facility maps. The maps show the maximum altitude around airports where the FAA can authorize operations under Part 107. It gives drone operators the ability to interact with the maps and provide automatic notification and authorization requests to the FAA. The agency calls LAANC an important step in developing the Unmanned Aircraft Systems Traffic Management System (UTM).

LAANC is part of a triad of registration, identification, and regulation the FAA is developing as part of its UAS integration mandate as handed down by Congress and the President, said Joe Morra, director of the safety operations branch for the FAA’s UAS integration office. Morra, speaking at Heli-Expo in March, said the challenge posed by integrating UAS into the NAS is particularly daunting when you consider the scope and velocity of the UAS industry. “There are roughly 310,000 manned aircraft registered now. We’re over 1 million UAS registrations. As of two weeks ago, more than 140,000 are for non-modeling purposes and the other 900,000 are for modeling purposes,” he said, adding that registration was the “fundamental” first building block of a coordinated national UAS system, from which all other tools—including airspace waivers, automation tools, and identification—flowed.

“Identification is important because the demand from the public is for more operations over people and expanded operations beyond the line of sight, to do things like package delivery and human transport, which is mentioned in the presidential memo. But it is the same safety culture that you [the helicopter community] have built up over many years: an aircraft being operated by a responsible person following a set of rules and is registered,” he said.

Morra called the recent FAA advisory rulemaking committee (ARC) recommendations on mandatory UAS identification “encouraging” and that they provide direction for building a system from “the ground up,” a parameter important not just to the FAA but also to “our law enforcement partners.” He said tracking is of less importance as “industry as a whole has a lot of creative and innovative solutions for tracking” but that “fundamental identification” was the linchpin for building “a whole automated system” capable of rapidly identifying, tracking, and deconflicting large numbers of UAS and manned aircraft in an integrated airspace system.

“When I say it provides awareness to air traffic management to control unmanned aircraft at large levels you have to think a little bit differently. It’s not like you can call up on the radio and get cleared into Class B airspace, not if you are going to do it on the scale that people are talking about,” Morra said, emphasizing that automated systems needed to provide awareness to not only ATC but also local law enforcement.

Morra said the automated LAANC system being rolled out not only provides operators with near instant authorization, but also allows ATC to know how high and how many Part 107 UAS vehicles are operating in any given airspace. “LAANC takes [authorizations that] took days or weeks and reduces it to seconds. Towers have pixelated their airspace, and if you are operating below certain altitudes the authorization can almost be automatic. And your device can determine that. That’s where we are heading with this type of automation. Once you know where somebody is going to be operating once they are identified and registered, that is the foundation for building how you have people operating around helicopters, manned aircraft, and airports in a way that works for everybody.”

Morra said expanding automation will further integrate UAS into the NAS, but for now it is the duty of UAS pilots to deconflict themselves from manned aircraft operations. “If someone is following the rules, they should be deconflicting themselves. The next step is; how [to] automate this more on the technological side. We all know even with manned aircraft that our eyeballs are not always the best way. Technology brings us a lot of different tools that might supplement that. If you could see those aircraft out there in a manner that give you the availability to at least know that they are there, and then link into ADS-B, or whatever.” However, for now, the most immediate and effective solution for deconfliction is expanding the manned aircraft safety culture to unmanned aircraft operators in all categories, be they recreational or Part 107, Morra said. “A lot of people don’t seem to realize the implications of the airspace that they are operating in. There are rules of the road and you have to follow them.”

No Replies to "UAS Automated Flight Approval Expanding to 500 Airports"