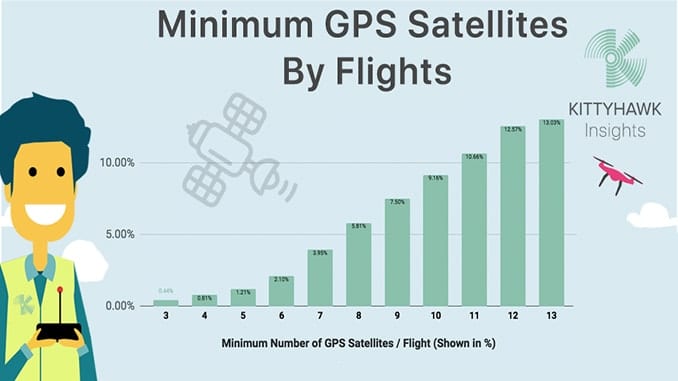 Your drone is subject to the whims of the environment you’re operating in. As drone operators, we have a lot of control, including the ability to choose not to fly, but even then, things can happen in flight that either the pilot or the software must respond to.

One of these factors is the number of GPS satellites the drone is able to communicate with. This is very much influenced by location, and operating environment. Urban areas tend to have a less clear view to the sky than do rural ones for example. Determining if the operation was skirting the lower limits of what aircraft commonly see is difficult to know unless of course, you have a lot of flights to look at.

Initially, we were going to look at the average of the minimum of GPS satellites per flight. However, since GPS is one of those metrics where you can’t have half a satellite and understanding what is the most frequent minima is the antithesis of an average here, we chose to use a modal distribution and derive our insights from that.

78% of flights didn’t see any less than 10 GPS satellites during their entire flight. This is very encouraging since 10 satellites is typically a safe number in terms of diversity and likelihood of good reception when you consider that this is a mix of GLONASS and GPS satellites.

In addition, the lowest number of GPS satellites available occurs frequently before the flight or at the end of the flight since obstructions may block a view of the sky.

For those unfamiliar, good reception to 3 GPS satellites is what is required for basic navigation, hence the term ‘triangulation.’ With each additional satellite able to be utilized, the precision of the navigation increases.

97.5% of all flights remained above 6 visible satellites at a minimum during the entire flight.

It’s also important to note that these are minimums. As one satellite is leaving the field of view another one may be entering. As the transition happens, if you had 3 visible satellites, the aircraft may briefly enter attitude mode but that’s not really a significant event for a well-trained operator or well-written software.

The duration of the GPS loss is a metric we’ll be examining in a future Kittyhawk Insights.

GPS and GLONASS working together provide good coverage for most drone flights. At Kittyhawk, we tend to prefer more redundancy over less. For the larger aircraft like the Matrice, Inspire Series, we prefer to see 12 or more satellites. For the smaller ships where the GPS antenna may have less isolation, like the Mavic Air or the Spark, 10 is a good starting point, but it’s not a deal breaker if it’s a little less.