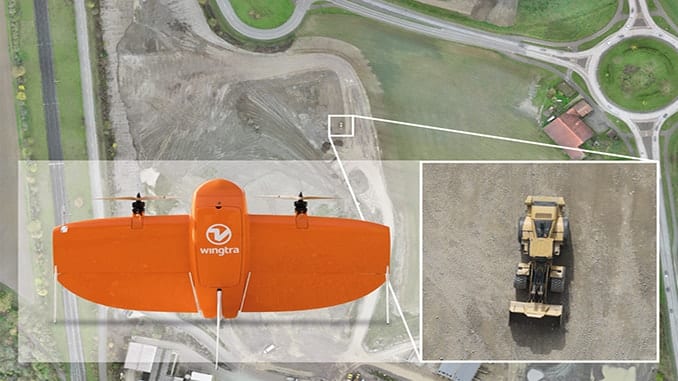 “With the WingtraOne PPK, we can offer a world first in drone photogrammetry–wide coverage at ultra-high precision. In a single one-hour flight, the WingtraOne can cover 130 ha (320 acres) delivering mappping with GSDs below 1 cm/px (0.4 in/px) with absolute accuracy down to 1.27 cm (0.5 in)”, said Armin Ambühl, CTO of Wingtra. He continued, “WingtraOne’s advantage is twofold: it combines VTOL with the latest PPK technology from Septentrio. With VTOL we can offer the best of both worlds: multirotors and fixed-wings. Vertical take-off and landing means hands-free operation and a smoother ride for the on-board camera payload. Secondly, efficient flying in fixed-wing mode means far greater coverage than any comparable multirotor.”

Gustavo Lopez, Product Manager at Septentrio said, “We are proud and excited to be part of this innovative project with Wingtra pushing the boundaries of aerial photogrammetry. The WingtraOne incorporates our AsteRx-m2 UAS OEM board and, photogrammetry applications requiring high-precision, low-latency positioning are what it does best. The board is specifically designed for quick and easy integration and, with Septentrio’s world-first, multi-frequency PPK, cm-level precision can now reach the parts dual-constellation solutions feared to tread.”

Following a flight, the GNSS data of the WingtraOne is processed offline using Septentrio’s PPK software. This  combines the drone data with correction data from a nearby reference receiver to get accurate cm-level geolocations for every photograph. The on-board high-resolution Sony RX1RII camera, AsteRx-m2 UAS receiver board combined with Septentrio’s PPK library and Pix4D photogrammetry processing software are together able to produce ground precisions of 1.3 cm (0.5 in) horizontal and 2.3 cm (0.9 in) vertical.

About Wingtra
Wingtra develops, produces and commercializes high precision VTOL drones that collect survey-grade aerial data. Wingtra entered the market in early 2017 and has been selling globally ever since. Recently the company has raised additional $5.8M to meet the demand in 2018 and partnered with one of the biggest surveying equipment dealers in US – RDO Integrated Controls.

More information about Wingtra on www.wingtra.com

Septentrio is committed to providing products that are easy to use and straightforward to integrate into existing setups and workflows. A team of experienced application engineers in Europe, North America and Asia are on hand to assist users at every step of their integration journey and for the lifetime of the product afterwards. Septentrio is headquartered in Leuven, Belgium and has offices in Torrance, California, and Hong Kong as well as partners around the world.