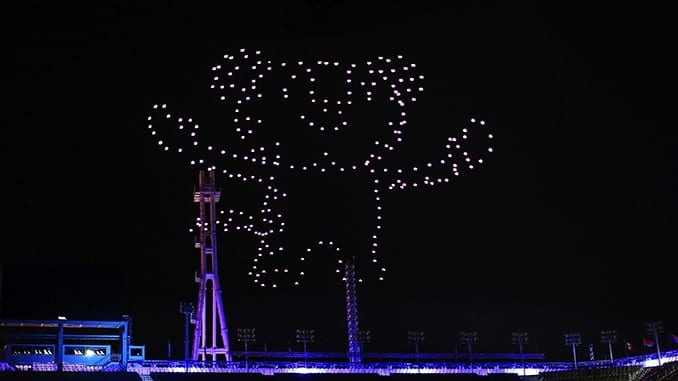 During the Olympic Winter Games PyeongChang 2018 Closing Ceremony, 300 Intel® Shooting Star™ drones took flight to celebrate the triumphant athletes who competed in this year’s games. The aerial performance painted colorful illustrations in the sky, including the Olympic mascot – Soohorang, the white tiger – who comes running in above the stadium, cheering on the athletes and creating a heart outline in the sky. The Intel Shooting Star drones create a volumetric heart, symbolic for gratitude and love towards the Olympic athletes. 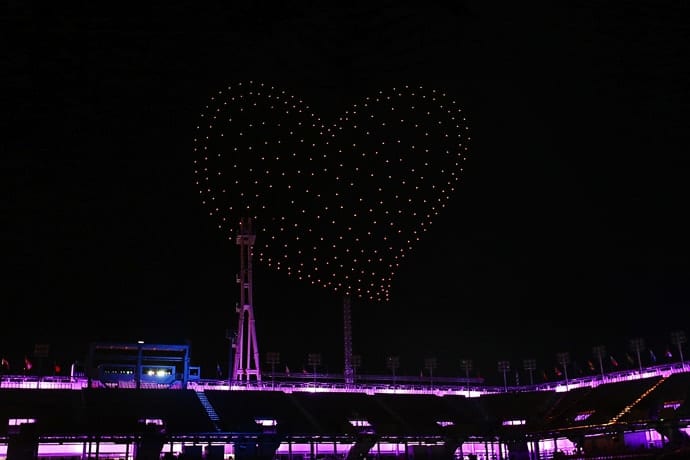 According to Natalie Cheung, general manager of the Intel drone light show division, Soohorang represents the kind of fortitude and discipline found in both the attending athletes and Intel itself. “Just like Soohorang, our Intel drones team has a challenging spirit and passion to push the limits and make amazing experiences possible,” said Cheung. “It’s been an honor to celebrate such magnificent athleticism and teamwork with Intel drone light shows, and a victory for us to see our animations of the games come to life.” Intel’s Shooting Star drones employed here were reportedly utilized to celebrate the Olympians on a nightly basis as well when weather permitted by aerially forming other shapes such as the PyeongChang logo, skiers, hockey players, and more.

While we’ve seen Intel produce quite a few of these UAV light shows in recent months such as yet another record-breaking performance at CES 2018 last month, the technology and streamlined process here continues to impress. If we see this Shooting Star system—where hundreds of UAVs are controlled by a single operator—continue to evolve, we might be looking at a significant shift in various industries. When movie studios are celebrating their home-video releases with Intel’s drones, and halftime shows are drawing viewers in with them,it’s likely we’ll see quite a few more Shooting Stars in the future.