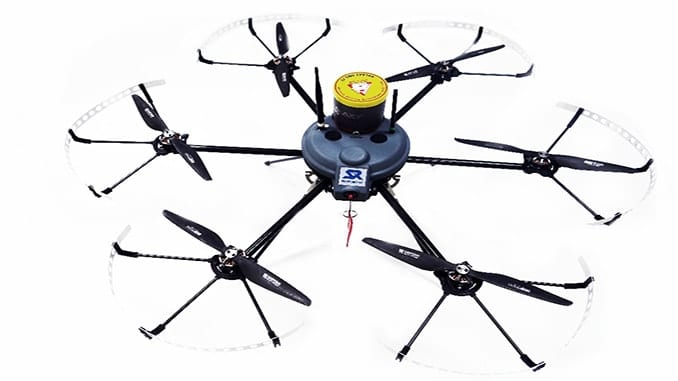 Skyrobotic, a company leader in the production of drones under 25 kilograms entirely Made in Italy, part of the Italeaf Group, announces that the company has obtained “project certification pursuant to art. 10.6 of the SAPR regulation” from the Italian National Civil Aviation Authority (ENAC) for the SR-SF6c system. The certification requires a primary control and control system whose software complies with the aeronautical standards specified in the EUROCAE ED-12 specification at least at design reliability level D.

“With the certification 10.6 – explains Stefano Neri, Chairman of Skyrobotic and Italeaf Group – the company leaves the early stage phase, after having passed the start-up phase, and becomes a national reference point for the opening of partnerships and industrial alliances aimed at creating an Italian chain of the high end drones sector. Skyrobotic, in fact, has decided to operate in a nascent market that is highly professionalized and requires the highest standards and requirements of reliability and safety. With this recognition we qualify our company as the reference production operator for the “safety” (environmental and worker safety, industrial inspections, inspections and surveys of industrial and energy production plants) and “security” sectors (citizens’ safety, urban and extra-urban security for specialized companies and law enforcement or prevention forces).

Skyrobotic drones had already received from the Civil Aviation Authority project certification for series production pursuant to art. 10.5 of the SAPR regulation, which allowed operators to use drones, subject to authorization by the competent Authority, in urban scenarios with safety restrictions.

“This type of certification will allow the APRs (drones) Skyrobotic to fly over urban areas in VLOS (Visual line of sight) conditions – says the Vice President, Giancarlo Grasso -. This is the maximum safety recognition provided by national regulations for professional drones, which will allow operators who choose our systems to be able to fly over urban areas or congested areas in complete safety and in full compliance with industry regulations. Thanks to the investments in research and development carried out at the Nera Montoro (TR) plant, we make a real leap in quality, opening up to Italian operators, both public and private, the possibility of using drones weighing less than 25 kg produced in series also for operations involving overflying of inhabited centres, communication and logistic infrastructures, industrial settlements, areas used for events and exhibitions. Therefore, new scenarios are opened up for aerial work with remote pilotage systems, reducing bureaucracy for operators, increasing safety conditions and guarantees for those in the area interested by overflight operations, implementing new turnkey solutions”.

With the achievement of certification, Skyrobotic crowns a successful path in the pursuit of the most important sector qualifications: from the certification of aeronautical standard EN-9100 for the Nera Montoro (TR) plant, to the possibility of issuing project conformity certificates according to the art. 10.5 of the Civil Aviation Authority regulation, up to this last recognition, which marks a turning point for the entire Italian professional drones sector.

With its own bouquet of qualifications, Skyrobotic takes the lead in the national producers’ sector, anticipates regulatory developments at European level and represents the ideal answer for leading operators in the professional, commercial, physical security and cybersecurity sectors at international level.

Finally, the certification pursuant to art. 10.6 of the SAPR regulation is an indispensable condition for participation in tenders and tenders promoted by the main public apparatus for order and safety.