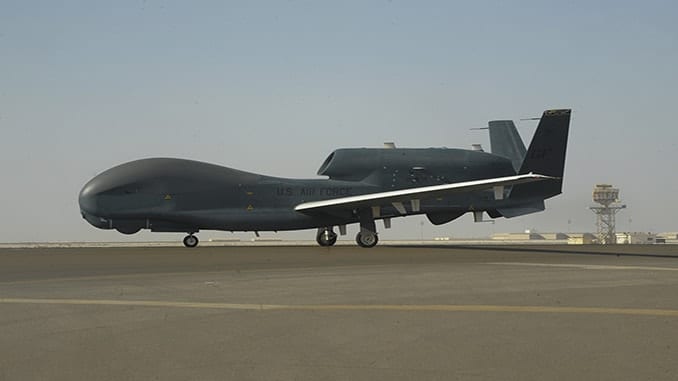 On Feb. 13, one of the U.S. Air Force RQ-4 Global Hawk drones reached 20,000 flight hours. The UAV (Unmanned Aerial Vehicle) is one of the three RQ-4Bs converted into EQ-4 and carry the BACN payload instead of the imagery intelligence (IMINT) sensors: it’s primarily a data and communications bridging node that supports multiple bridges simultaneously across multiple radio types. The crews who operate these particular flying gateways call them: “Wi-fi in the sky.”

“This milestone was the original lifespan of the aircraft,” said Senior Master Sgt. Matthew Pipes, Hawk Aircraft Maintenance Superintendent deployed to the 380th Air Expeditionary Wing, in a public release. “It’s exciting to see where this technology and this aircraft can take off too and how it can help those who are downrange.”

The aircraft (based on the photo the example “A2019”, an RQ-4 Block 20 converted into EQ-4), reached this milestone at its deployment base of Al Dhafra, UAE, from where the Global Hawks equipped with a Battlefield Communications Airfield Node payload are regularly launched for missions that can last 24 hours, or more. For instance, the very same aircraft surpassed the 10,000 flying hours in March 2015 during a 30.5-hour mission.

“From being a manned aircraft pilot, getting 12-hours in the air was a long day…you needed a day or so to recover before going up on your next mission,” said Major Manuel Ochoa, U.S. Air Force RQ-4 Global Hawk pilot from the 99th Air Expeditionary Recon Squadron stationed at Al Dhafra Air Base. “When it comes to this plane, you can cycle pilots without having to land and that is a great benefit.”

Missions flown by the BACN platforms are extremely important. As explained several times here at The Aviationist, BACN is a technological “gateway” system that allows aircraft with incompatible radio systems and datalinks to transfer information and communicate.

The U.S. military uses various datalink systems to exchange tactical information, and many are not capable of working together.  For example, a U.S. Air Force F-15 can use its Link-16 system to exchange target information with a U.S. Navy F/A-18.  However, the F/A-18 could not exchange information with a USAF B-52 or B-1 bomber.  The advanced F-22 can connect with other Raptors via datalink but can only receive over the standard, legacy Link-16 datalink used by most allied aircraft.

This lack of compatibility between different platforms is a major obstacle in all those theaters where air assets from many services are called upon to provide support for ground troops of different nations.  Additionally, the complicated joint operations required to engage a modern integrated air defense system are greatly simplified by exchanging target information via datalinks.

Hence the need for a “flying gateway” as the EQ-4s, all assigned to 380th Air Expeditionary Wing based at Al Dhafra Air Base to support OIR (Operation Inherent Resolve).

The BACN system is also used to link ground troops and Forward Air Controllers (FACs)/Joint Terminal Attack Controllers in a non-line-of-sight (LOS) environment.  For instance, in the rugged, mountainous terrain of Afghanistan, troops are not always able to establish LOS communications with close support aircraft overhead.  Moving position or relocating to higher ground could be fatal in a combat situation.

E-11A aircraft (Bombardier Global 6000 advanced ultra-long-range business jets that have been modified by the U.S. Air Force to accommodate Battlefield Airborne Communications Node payload) with 430th Expeditionary Electronic Squadron deployed to Kandahar Airfield, Afghanistan have been involved in this kind of missions (some of those trackable on the Internet as highlighted several times) since they arrived in theater for the first time 9 years ago.

By orbiting at high-altitude for long times, BACN equipped air assets can provide a communications link from ground commanders to their allies in the sky.  For example, a legacy USAF A-10 attack aircraft could loiter away from a battle area while using the BACN link to communicate with a special-forces FAC on the ground.  The A-10 pilot could wait until all targeting information is ready before “un-masking” and beginning an attack run.

Vahanas' Alpha One Soars On Its First Fully Self-Piloted Flight