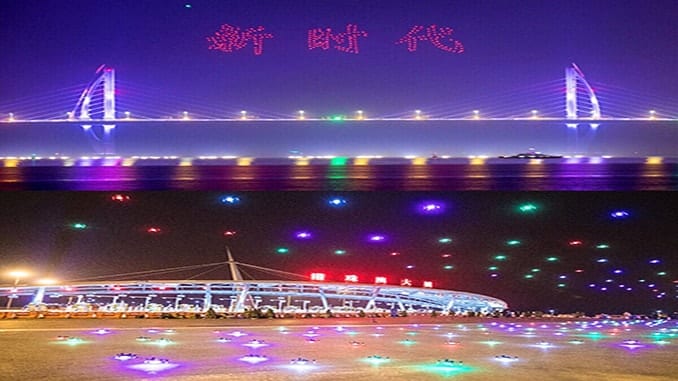 Families gathering to have the reunion dinner on each Chinese New Year’s Eve is the most valued ritual for Chinese people. An indispensable “feast” at that time is watching the Spring Festival Gala. On February 15th, Zhuhai, the window of reform and opening-up in southern China, held a parallel session of the Gala for the first time.

An incredible formation of unmanned aerial vehicles (UAV), driverless cars and unmanned surface vessels (USV) was staged at the Hong Kong-Zhuhai-Macao Bridge, one of Zhuhai’s landmarks. An aerobatic flight team and the UAV formation embodying the scientific and technological strength of Guangdong and braveness, formed varied and amazing shapes, dazzling 7 million global viewers of the program at the beginning of the Gala.

The Bridge, which has just been completed and is the longest sea-crossing bridge in the world, connects Zhuhai to Hong Kong and Macao. Thus, Zhuhai has become an important juncture in the development strategy within the Guangdong-Hong Kong-Macao Greater Bay Area. This night, the Bridge became the most spectacular background and stage for the show of technological innovative equipment on land, sea and air.

“The parallel session in Zhuhai was shoot at the Hong Kong-Zhuhai-Macao Bridge and the Chimelong Ocean Kingdom, which demonstrates the openness and innovative spirit of the city,” said one of the producers of the Gala.

“Zhuhai is striving to build itself into an innovation high ground within the Bay Area, with increasingly modernized and internationalized platforms for innovation,” said Yao Yisheng, Mayor of Zhuhai. “The main bodies for innovation in Zhuhai are thriving with more than 1,400 new high technology enterprises featuring high-precision, advanced and specialized industries.”

The unmanned surface vehicles shown on the Gala are manufactured in Zhuhai by Yunzhou Intelligent Technology Co., Ltd. (also known as Oceanalpha). Zhuhai has been focusing on advanced equipment manufacturing industries such as shipbuilding and ocean engineering, aerospace and rail transit.

Statistics from Zhuhai’s Publicity Department show that the total value added in Zhuhai’s high-tech industries reached 30.687 billion yuan in 2017, 27.8 percent of the value added in industries above the designated scale. The city will become a national manufacturing base for general aviation, and lead the world in producing the ocean engineering equipment by 2025.

Thanks to China’s technological innovation, particularly in the fields of major equipment manufacturing and engineering construction, the world has a deeper understanding of China. It has also seen an influx of Zhuhai’s innovations, including the Zhuhai-1 remote sensing micro-nano satellite constellation, the Hong Kong-Zhuhai-Macao Bridge and China’s homegrown AG600 (codenamed Kunlong), the world’s largest amphibious aircraft.

While counting down for the new year, a lively “Lion Dance in Spring” program from Zhuhai’s parallel session was again on live broadcast. The drums and gongs at the Chimelong International Ocean Resort sounded jolly, and bursts of vibrant fireworks lit the skies above the Bridge when the Chinese New Year bell rang, extending new year greetings to Chinese people all over the world. Zhuhai becomes China’s innovation “show floor” through the parallel session of the Gala and sends out its invitation to the whole world.