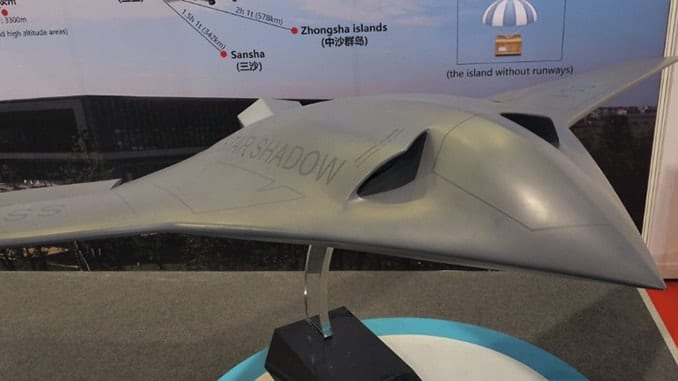 Specifically designed as a low-observable and highly survivable surveillance and strike platform, the Star Shadow is envisioned to have a maximum take-off weight (MTOW) of 4,000 kg and feature a truncated diamond-shaped airframe measuring an overall length of 7.3 m with sweptback outer wings that have a total span of 15 m. According to the company, this configuration offers radar cross section (RCS) characteristics in the range of 0.1 m².

Control surfaces are built into the trailing edges and upper sections of the fuselage and wings, with a pair of dorsally mounted, low observable engine intakes located on either side of the nose leading to similarly configured exhaust outlets towards the rear of the fuselage.

Take-off and recovery will be effected via conventional means, with the air vehicle fitted with a retractable undercarriage assembly comprising a twin wheeled nosewheel unit and single wheeled main units.

The Star Shadow will also feature a ventral payload bay that measures 2.5 m long, 0.76 m wide, and 0.7 m in depth, with a payload capacity of 400 kg. An as-yet unspecified range of sensors and weapons is being firmed up, although the company declined to provide details at present.

The Star Shadow will be powered by two indigenous TWS800 small turbofan engines developed by the Chengdu Chinese Academy of Sciences Aircraft Engine Co Ltd (CCAS Aircraft Engine), a company founded in October 2014 by a number of public and private enterprises, including the Chinese Academy of Sciences’ Institute of Engineering Thermophysics and the privately-owned Shaanxi Ligeance Mineral Resources Co Ltd.