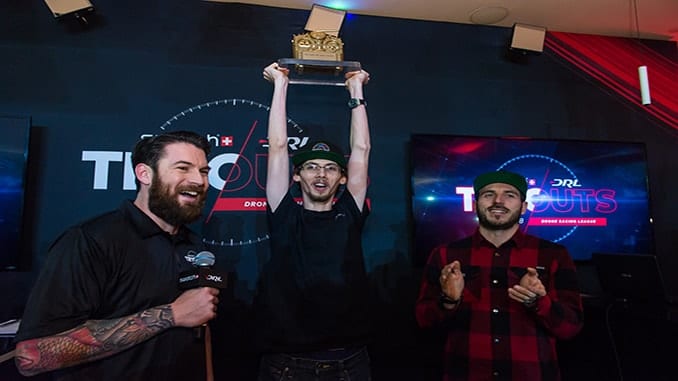 The Drone Racing League (DRL), the global leader in professional and high-speed drone racing, today announced Brodie “Robogenesis” Springer as the winner of the 2018 Swatch DRL Tryouts, the fierce eSport competition that transforms a gamer to drone pilot overnight.

Pilot hopefuls from around the world have been battling it out on the DRL Simulator, the most realistic drone flight and racing simulator, since its launch in November 2017. This past Saturday, February 3, the top 24 contestants went head-to-head in a live showdown in the Mixer NYC Studio at the flagship Microsoft Store on Fifth Avenue in New York City. After speeding through the final heat in a perfectly simulated replica of the 2017 season’s Miami Nights course map, Robogenesis was named the Swatch pilot for the 2018 DRL Allianz World Championship Season and given a professional drone racing contract for $75,000.

“It’s life changing to be able to do what’s been my passion for the past two years, to race drones around the world, and to be paid to do it,” said Robogenesis.

25-year-old gamer from Port Angeles, Washington, Robogenesis completed the final heat in 37.04 seconds, more than three seconds faster than Tryouts second place winner, Emmanuel “UFO” Moto. Robogenesis will go on to compete in the 2018 season, which will air later this year in more than 75 countries on sports networks including ESPN, Sky, and ProSieben amongst others.

“We’re incredibly excited to welcome Robogenesis, who will compete as the inaugural Swatch pilot in our upcoming 2018 season,” said DRL CEO and Founder, Nicholas Horbaczewski. “Aspiring pilots from across the world have been participating in our 2018 Swatch DRL Tryouts and Robogenesis stood out from the get-go, racing to the top of the leaderboard and winning this weekend’s tournament.

DRL streamed the Tryouts globally on DRL.io for fans to watch, and Swatch held a public viewing party – equipped with DRL simulator and FPV (First Person View) stations — at their Flagship store in Times Square.

Swatch released a statement, noting: “Swatch was particularly excited to commit itself, in partnership with the Drone Racing League, to running the 2018 Tryouts and offering everyone a chance to become the next professional drone pilot by participating in this digital tournament. We are also pleased to announce that the winner, Brodie “Robogenesis” Springer, is the new official Swatch Pilot. His skills and passion reflect the values of these elite competitions and we are thrilled to have him on board!”

Last year, Robogenesis landed a spot in the 2017 Tryouts, but only made it through the first round. Jacob “Jawz” Schneider was crowned the winner, earning a $75,000 professional contract and a spot in the 2017 DRL Allianz World Championship. The Indiana native successfully raced all the way to the 2017 DRL World Championship in London where he placed 1st at Level 4: Boston Foundry, and 7th overall.

ABOUT DRL
DRL is the premier drone racing circuit for elite FPV pilots around the world. A technology, sports and media company, DRL combines world-class media and proprietary technology to create thrilling drone racing content with mass appeal. In 2018 DRL is hosting a global series of seven races, the Allianz World Championship, to be broadcast on ESPN, Sky Sports, ProSiebenSat.1 Media SE, Disney XD, OSN, FOX Sports Asia and other leading broadcast channels around the world. Founded by Nicholas Horbaczewski in 2015, DRL is a privately held company headquartered in NYC.

No Replies to "The DRL And Swatch Introduce First Swatch-Sponsored Pilot, Winner Of Global eSport Competition"