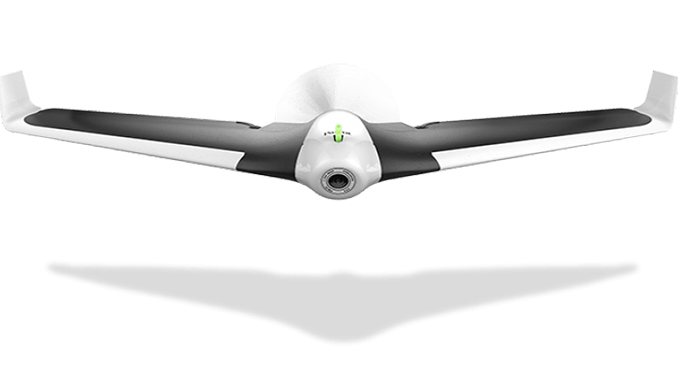 Parrot Disco, a fixed-wing drone whose aerodynamic design and capabilities distinguish it from the rest. It has 45 minutes of battery life and is equipped with advanced automatic control and an HD Camera.

The Parrot  Disco drone is a fixed-wing drone that’s a bit of an unorthodox entry in the world of quadcopters; it’s not technically a quadcopter, after all, rather it’s flying wing. Even seasoned drone users might find it difficult to adjust to the new controls and mechanics.

Quick Specifications of the Parrot Disco

What Comes In the Box

The Disco set-up includes three main parts: the Disco, made from EPP expanded polypropylene, which is reinforced with carbon tubes throughout the wing; the Skycontroller 2 and, finally the Cockpitglasses headset, designed to hold iOS or Android phones, which streams the 14-megapixel Full HD footage straight from the camera that is mounted at the front of the Disco. Plenty of flight footage can be kept on-board, with 32GB of storage packed inside. The Disco also ships with a spare set of rear propellers, a charger, and USB cable.

What’s cool about this design is that it is fly-by-itself (not fully autonomous), meaning you can take the Parrot Disco out in any open large field, toss it in the air, fly it around for over 30 minutes, bring it back and hit the land button and watch the autopilot kick in and gently guide it to the ground in one piece.

The Disco is optimized for stability and speed in flight. The aerodynamic airfoil reduces drag and improves lift. The winglets on both of the wings improve performance while the elevons from the trailing edge provide the control of the Disco.

The Parrot Disco is powerful, with a 1280 kV brushless motor helping it reach speeds of 50 mph and to withstand winds of 24 mph. It also has 5V servo motors and is RF Receiver ready for SBUS, SUMD, CPPM.

For flying the aircraft through FPV, the Cockpitglasses headset is compatible with a wide range of smartphones,  with screen sizes from 4.7″ to 5.7″.

Taking off is as simple as pressing the launch button and then tossing the drone in the air. It does have a pretty big wingspan though, so the toss can be a little tricky. It’s a little awkward at first, but it gets easier as you practice.

After that toss, the Disco enters an orbital standby mode where it circles around you at 50m above the ground. By default, this is within a 60m radius but you can adjust this to be larger or smaller. This is the Disco’s equivalent of a quadcopter’s hovering, where you don’t need to have any user input. It does mean you’re going to need a more open space than a standard quadcopter, however.  It will continue to circle until your ready start flying with the controls, so you can be the thrower and the flyer without worrying about what the Disco will be doing while you’re busy picking up the controller.

The Disco can keep consistent altitude and direction like that for about as long as you need, even once you take control. That “control” mostly just consists of making turns; by default, the drone’s autopilot simply has the device fly straight ahead otherwise.

The Disco’s autopilot system or C.H.U.C.K (Control Hub & Universal Computer Kit) is impressive. It’s an orange package which contains all of the equipment needed to make the Parrot Disco work:

The flight characteristics are impressive, with a top speed of 50 mph due to the brushless motor, a max altitude of 492 ft, 45 minutes of flight time and a range of 1.2 mi. The stability of the flight is due to the algorithm for assisted piloting developed for the C.H.U.C.K, which always monitors flight parameters and prevents stalling while the user makes critical maneuvers.

Direction, altitude, and speed are maintained through an inertial navigation system (accelerometer, altimeter, gyroscope) and a GPS + GLONASS module. All of these features greatly simplify flying.

There are two landing modes for the Disco. One is a straight in landing, where you come into the wind, push the land button, which reduces the power while bringing up the nose, the rear propeller also folds flat to avoid any damage during landing. All in all, the landing is as graceful as you can expect, although it’s worth noting we only tested it landing on grass. The other option is a circular landing, with the UAV coming back to where the home point is, going into a huge spiral, and gradually landing. The spiral landing is also performed when the drone gets disconnected for some reason or exits the designated flight area (geofencing), in which case it will “return home” and initiate the landing.

As with most new drones, there’s a first-person view (FPV) headset for the Parrot Disco. You insert your smartphone in and connect it via a USB cable to the Skycontroller 2. You can then get a direct FPV from the Disco’s front camera, streamed at 720p resolution. Of course, image quality will be dependent on what smartphone you use, we tested using an iPhone 7, which looked ok the video was clear with a little signal loss at long range.

The Disco is equipped with a 1080p/14 megapixel wide-angle front camera that uses a 3-axis gimbal for stabilization, the same camera Parrot used for the Bebop 2. The camera can be tilted digitally 180° towards the ground. Footage and photos are saved to the internal 32GB of storage. There’s no SD card expansion.

Keep in mind the Disco is not intended to be a camera bird, with that being said the footage is just soft and lacking detail.

Flying the Disco is extremely easy, and is a heck of a lot of fun to fly.  However, you’re going to need a large area to fly and land.

From a build quality and engineering standpoint, Parrot has really done a fantastic job. The whole system works very well the app works wonderfully, and it’s a very cool experience.

For more experienced pilots the Disco can be flown in manual mode and is compatible with the majority of RC remotes, pilots can connect their own RC transmitters to the Disco to use whatever gear they’re used to and push the Disco to its limits.

The Parrot Disco is currently selling at a huge discount and at today’s pricing, we think it’s a great value.