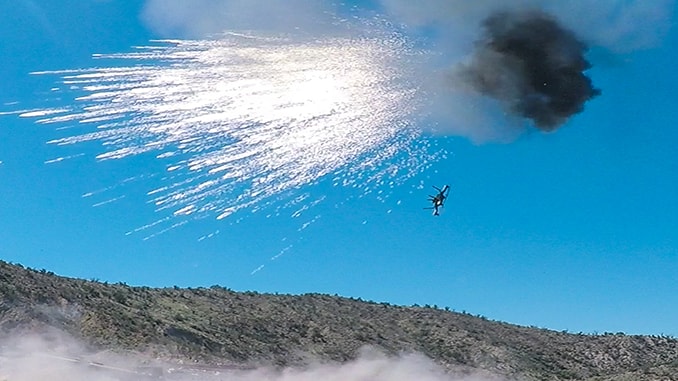 Orbital ATK  a global leader in aerospace and defense technologies, recently participated in the Maneuver Fires Integrated Experiment (MFIX) at Ft. Sill, Oklahoma. The event allowed soldiers to use counter-unmanned aerial system (C-UAS) technologies during a series of demonstrations to provide feedback on how these systems performed and could potentially help fill capability gaps for short range air defense.

Orbital ATK demonstrated its ability to combine both electronic and kinetic attack through its AUDS (anti-unmanned aerial vehicle defense system) which detects, tracks, identifies and defeats drones, and also brings a kinetic element through the integration of the company’s XM914 30mm Bushmaster Chain Gun mounted to the Stryker combat vehicle platform. The gun system also provides the vehicle crew with the firepower needed to defend against ground threats. The combined weapon can work together or independently.

“The ability to insert proven technologies is the key to shortening acquisition time and providing soldiers with the equipment they need today,” said Dan Olson, Vice President and General Manager for Orbital ATK’s Armament Systems Division. “Exercises and demonstrations such as MFIX provide the Army and industry the ability to understand how we can work together to focus our efforts to quickly deliver next generation technologies.”

The AUDS system is modular, meaning that pieces of it can be tailored for use on different platforms types depending on mission requirements or, it can be installed at a fixed site position to provide C-UAS defense for a facility or operating base.

Orbital ATK also demonstrated how a soldier, armed with its shoulder-fired XM25 airburst weapon system can down a malicious drone. Originally designed to provide soldiers with an ability to defeat targets in defilade positions, the XM25’s fire control system and 25mm airbursting ammunition have proven during MFIX and demonstrations conducted by Orbital ATK, that C-UAS is a natural additional capability the system provides.

Orbital ATK is a global leader in aerospace and defense technologies. The company designs, builds and delivers space, defense and aviation systems for customers around the world, both as a prime contractor and merchant supplier. Its main products include launch vehicles and related propulsion systems; missile products, subsystems and defense electronics; precision weapons, armament systems and ammunition; satellites and associated space components and services; and advanced aerospace structures. Headquartered in Dulles, Virginia, Orbital ATK employs approximately 13,000 people across the U.S. and in several international locations.