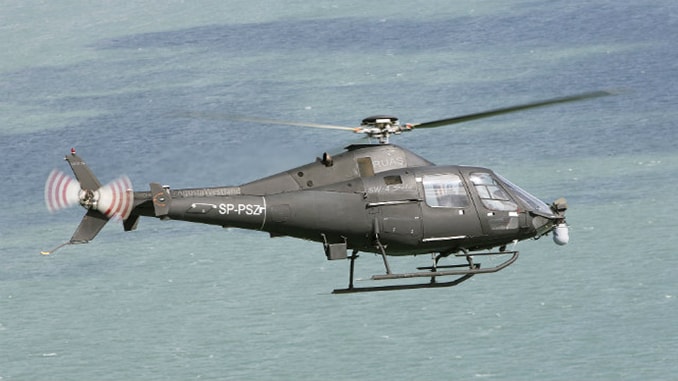 Leonardo is to lead an EU-funded demonstration of the use of unmanned air vehicles during maritime operations, with the work to include flight trials from next year.

Following a selection announced by the company on 12 January, the “OCEAN2020” activity will integrate a variety of unmanned systems – including fixed- and rotary-wing designs – for use during major maritime operations. Involving 42 partners from 15 countries, the work will showcase the ability to deliver a recognized maritime picture via satellite to a prototype European command and control center to be established in Brussels.

The first series of trials will take place off Italy’s Mediterranean coast during 2019, led by the Italian navy and Leonardo and involving the manufacturer’s Hero and Solo (pictured) unmanned rotorcraft. “The research project will see the integration of unmanned platforms in surveillance and interdiction missions,” the company says.

This will be followed by a second phase to be conducted in the Baltic Sea in 2019, under the coordination of the Swedish navy and Saab.

Leonardo says the OCEAN2020 project involves the defense ministries of Greece, Italy, Lithuania, Portugal and Spain, with further support coming from Estonia, France, the Netherlands, Sweden and the UK. Its industry partners include Hensoldt, MBDA, Qinetiq and Safran.

The maritime integration project is to be conducted under the aegis of the EU Preparatory Action on Defence Research programme and follows a selection made by the European Defence Agency. Saab says it expects contracts to be placed “in the coming weeks”.

No Replies to "Leonardo To Lead EU Maritime UAV Demonstration"