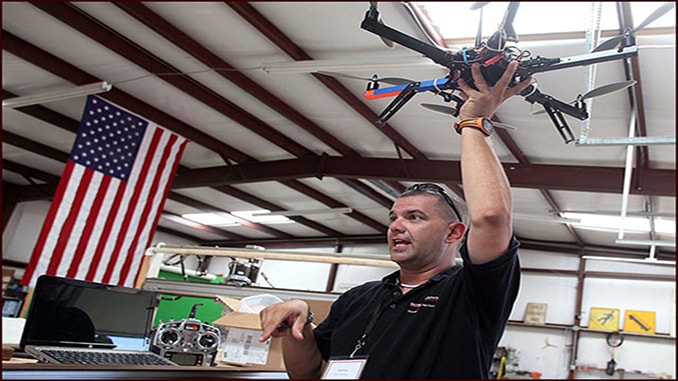 An electronic border security system – under development for seven years – will be demonstrated on Saturday, January 13th at the Arizona/Mexico border.  A patented sensor system called SEIDARM will direct drones to intercept “threats” coming north from the border – sending back live video of the action.  The demonstration will run from noon to 2 P.M., and will be hosted by Mike King of American Border Patrol, a non-governmental organization.

The drones, professional off-the-shelf versions, are called HERMES.  SEIDARM will send two HERMES drones – one named Hilda and the other George – to intercept “targets” coming north from the border – more than one-half mile apart – at the same time.  Hilda and George will fly search patterns, flying to where HERMES detected “people” – sending back video of the “suspects” – before returning to land – all automatically.  Video from both drones will be seen live on an outdoor system.

The demonstration will include detection of a low-flying aircraft, and will track a Hummer H2 driving along the border.

An adaptation of oil exploration technology, the system is called SEIDARM for Seismic Detection and Ranging Mechanism.  First demonstrated for members of the Arizona State Legislature in 2010, with patents awarded in 2015 and 2017, the system is now being studied by the Department of Homeland Security, Customs and Border Protection.

SEIDARM can detect one person walking at five hundred feet, compared to 40 feet for existing Border Patrol ground sensors.  It can distinguish between people, vehicles and aircraft.  The system is buried and solar-powered and can provide seamless protection on the entire border – at a small fraction of the cost of a wall.

“This technology does not necessarily replace a real wall, but it can perform like a virtual wall by assuring detection and apprehension,” demonstration host Mike King said.  “And,” King added, “It can tell the government where a real physical barrier is needed – and how it is working once installed.”  The technology can provide a long-sought-after metric of border security, King said.

The system was recently featured on Michelle Malkin Investigates, and has been covered by Voice of America.

This video of a raw test of the system on December 11, 2017, shows detection of one person walking 500 feet from a line of SEIDARM sensors.