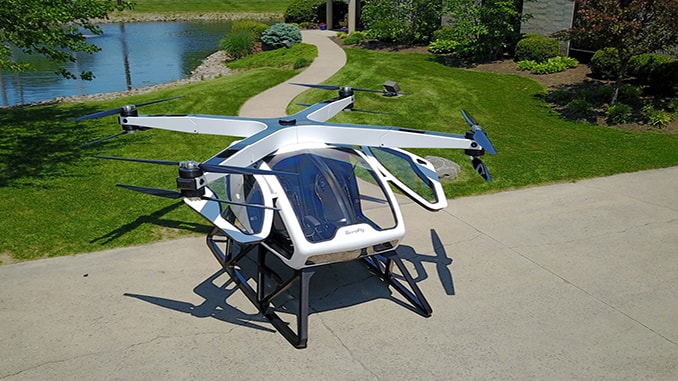 Workhorse Group Inc. an American technology company focused on providing sustainable and cost-effective electric mobility solutions to the commercial transportation sector, today announced it has received an Experimental Airworthiness Certificate from the Federal Aviation Administration (FAA) that will allow the company to conduct test flights of its SureFly™ electric hybrid helicopter. The first test flight is scheduled for 12:00 p.m. local time in Las Vegas on January 8, 2018, prior to the start of the 2018 Consumer Electronic Show (CES). On December 27, 2017, Workhorse announced that it intends to spin off its SureFly business into a separate publicly traded company called SureFly, Inc.

SureFly, the world’s first electric hybrid helicopter, features a drone-like octocopter design, a two-person, 400-pound payload capacity and a range of approximately 70 miles. SureFly was first unveiled at the Paris Air Show in June 2017, and will be on display at the Workhorse CES exhibit, located on the Central Plaza at Booth #31, near the main entrance of the show. The company is currently accepting SureFly pre-orders at www.workhorse.com.

About SureFly
SureFly re-invents the helicopter, making it safer, easier to fly and much more affordable than a conventional helicopter. Its design includes four propeller arms, with two fixed contra-rotating propellers on each arm; a hybrid propulsion system combining gasoline and electric power; and a backup lithium battery pack to drive the electric motors in the event of engine failure. In addition to its redundant safety features, SureFly includes a ballistic parachute that is designed to safely return the aircraft to the ground in emergency situations.

SureFly’s hybrid design leverages Workhorse’s battery pack, management systems and controls utilized in its currently commercialized range-extended battery electric trucks. SureFly’s  gasoline combustion engine generates electricity and a parallel battery pack offers a backup power source, eliminating the need for larger batteries or long battery charging periods between flights. Pilots who have inspected SureFly are attracted to its easy-to-pilot design — the aircraft is piloted by joystick in a similar fashion to flying a drone. The SureFly is expected to be capable of carrying a pilot and passenger or cargo up to 70 miles. After a quick refueling, SureFly will be ready for the next hop.

Early models will be pilot-operated. Future models are intended to be capable of autonomous flight. Anticipated markets for the SureFly are precision agriculture, surveillance, aerial inspection, emergency response tasks, urban commuting and various military applications. The company is working toward full FAA certification of the helicopter in late 2019. The expected price of the SureFly is approximately $200,000.

About Workhorse Group Inc.
Workhorse is a technology company focused on providing sustainable and cost-effective solutions to the commercial transportation sector. As an American original equipment manufacturer, we design and build high performance battery-electric vehicles including trucks and aircraft. We also develop cloud-based, real-time telematics performance monitoring systems that are fully integrated with our vehicles and enable fleet operators to optimize energy and route efficiency. All Workhorse vehicles are designed to make the movement of people and goods more efficient and less harmful to the environment.

The Next Level: Ethernet/IP Based Thermal Imaging Drone Payloads By TeAx

HERE And Unifly Announce Partnership To Map The Airspace For Drones