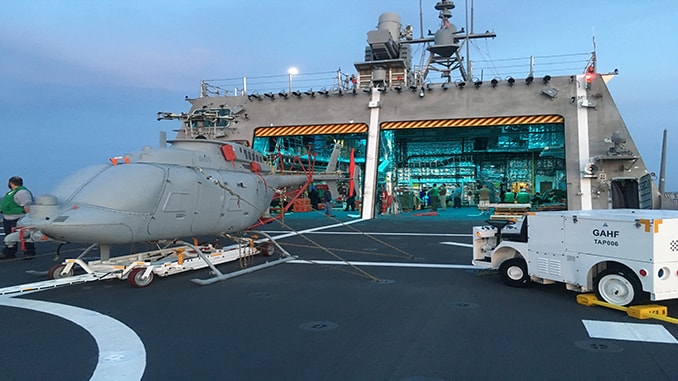 Fire Scout to Serve as Forward Spotter for Navy With Addition of Radar, Datalink

The Navy’s MQ-8C Fire Scout unmanned aerial vehicles will receive a new radar and datalink to set the UAV up as a forward spotter for the Navy’s surface fleet.

The Northrop Grumman-built UAV is set to be upgraded with a Leonardo Osprey 30 Active Electronically Scanned Array (AESA) radar and the Link 16 datalink, the combination of which will allow the UAV to distribute air-to-air and surface targeting information to ships in a surface action group, company officials told USNI News last week.

“You’ve seen a good body of literature coming out of the Navy describing distributed maritime operations and how they view that: a lot of different ships spread out over very broad ocean areas. And having the Fire Scout with Link 16 as part of that formation of ships is a key enabler to that capability and requires no additional modification to any of the other platforms,” Jack Thomas, director of Tactical Autonomous Systems Mission Engineering at Northrop Grumman Aerospace Systems, told USNI News last week.

“Putting it aboard Fire Scout is really going to shorten the cycle from cue throughout the mission if you were engaging anti-surface warfare [targets]. We certainly see Fire Scout as the long-range, high-endurance sensor that does the detecting and identification that will shorten that cycle from initial detection through to managing that track where we see the incorporation of Link 16 into that program.”

As part of the Navy’s notional distributed maritime operations concept, Fire Scout being resident on a future frigate or Littoral Combat Ship could route targeting information from its AESA radars at ranges much further than the sensors on a surface ship but still within the range of weapons that could reach a surface target.

“Right now the focus is on the sensors which are the advanced radar on the aircraft and continuing that integration effort,” Melissa Packwood, Fire Scout program director at Northrop Grumman Aerospace Systems, told USNI News.
“The Navy’s plan for testing for the MQ-8C in the springtime of next year.”

The Fire Scout will also be integrated with the Johns Hopkins-developed Minotaur Track Management and Mission Management system that combines information from several different sets of sensors to create a unified target picture for a battle group.

The platform is currently operating on the Navy’s Littoral Combat Ships and will be a key component of the upcoming next-generation frigate program (FFG(X)), according to the Navy in its submissions to industry on the requirements of the new ship.

“In the future, there was a good piece of news that the Navy has signaled that, as part of the FFG(X) program, the future frigate will incorporate Fire Scout as part of its baseline requirement,” Packwood said.
“That’s where we see it going. It was really encouraging for us to see that in its documentation.”

The service has so far bought 30 MQ-8Cs for the LCS program, Packwood said.

No Replies to "Fire Scout to Serve as Forward Spotter for Navy With Addition of Radar, Datalink"