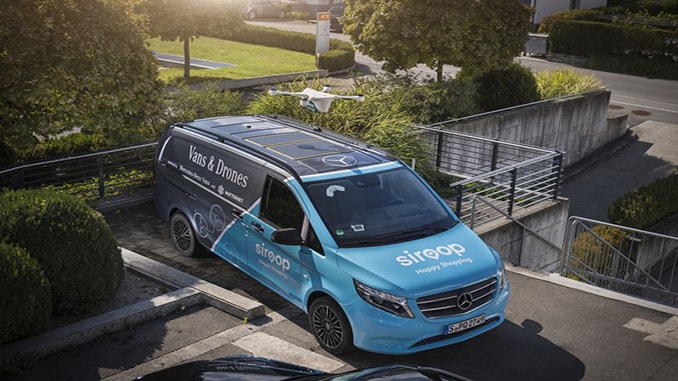 Mercedes-Benz, conducting the biggest test using drones to ship everyday items like ground coffee and cellphones, said the mini aircraft completed 100 drop-offs to strategically placed vans in Zurich with a perfect safety record and more deliveries are planned for next year.

About 50 individual customers placed orders with Swiss online shopping platform Siroop, choosing “airmail deals” from selected items from retailer Black & Blaze Coffee Roasting Co. for same-day delivery. The drones then flew to four fixed points in the city, covering a distance as far as 17 kilometers (11 miles) to land on the roofs of specially adapted Mercedes-Benz Vito vans. The parcel is carried by road for the final stretch, before the drones return.

“Our expectations were all met — our main goals were about the technical feasibility and execution,” Corinna Elosge, who coordinates the last mile logistics vans and drones project for Mercedes’ parent Daimler AG, said in an interview. “We’re really, really satisfied because we had a perfect safety score.”

The miniature helicopters, developed with U.S. company Matternet, delivered parcels for a total of 11 days as part of a three-week test. Daimler last year said it was looking at drones as part of a 500-million-euro ($597 million) effort to speed delivery times for online orders, amid the boom in electronic commerce. Amazon.com Inc. in December made its first-ever drone delivery, while convenience store chain 7-Eleven last year flew a parcel of chicken sandwiches and doughnuts to a private residence in Reno, Nevada.

For Mercedes, the pilotless craft are components of a van prototype featuring a suite of on-board systems like digital sorting equipment that could cut in half costs for the final portion of a parcel’s journey. While the drones didn’t directly deliver to a customer’s doorstep, they skipped much of the inner-city traffic, and saved one journey from the retailer to the logistics center.

As more delivery companies look into cutting costs and offering same-day services, the potential of drones has captured significant attention, even as rules limit where the craft can fly. While more pilot tests are planned for Mercedes’ drones next year, much will depend on regulation, Elosge said, as making drops to individual vans parked up at random spots also remains part of the company’s plans.

“Regulation is a decisive factor for us,” she said. “We are working cooperatively with authorities and are ready to engage with them about our experiences because we feel governments do depend on insight from industry as they want to learn more.”