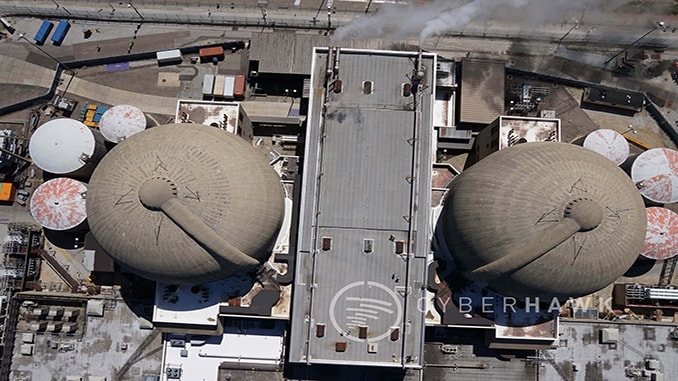 Cyberhawk Innovations, a market leader in inspection and survey using unmanned aerial vehicles (UAV), has completed another world first for the drone industry, this time in the nuclear energy sector.

Cyberhawk inspected two concrete PWR containment domes for American Electric Power at the Cook Nuclear Plant, located along Lake Michigan’s eastern shoreline. Although drones have previously been utilized in the nuclear industry this was the first time a drone has been used by the American Society of Mechanical Engineers (ASME) according to the Section XI Code. The Code refers to several American Concrete Institute standards for completing an examination and this inspection has been recognized within the nuclear industry as a best practice based on these standards.

Traditionally, inspections of this type would involve using a man basket with a 60m (180ft) crane incurring significant time and cost just to get the equipment to the site and set up for the inspection. In contrast, it took just one week for Cyberhawk to inspect both containment domes using a drone with minimal site disruption. The drone inspection generated direct cost savings of over 300% for AEP as well as significant indirect cost savings through reduced site disruption. Additionally, the drone inspection method involved capturing images of 100% of the dome surface to the ASME code standard with the results digitized into a 3D point cloud, that will allow direct digital comparison for any future inspections.

Cyberhawk was selected for this project due to its unrivaled reputation for conducting safe and efficient UAV inspections in hazardous areas, all around the world. The team which mobilized to the site, including an experienced pilot and a highly qualified inspection engineer, completed the inspection to the ASME code examination requirements.

A detailed Hazard and Operability (HAZOP) in the project work up allowed the AEP and Cyberhawk team to overcome a host of operational challenges, including working around the plant’s other scheduled projects without causing any disruption.

As a UAV company that has extensive experience in multiple projects and sectors, Cyberhawk’s pilots and engineers have a varied and very experienced skill set. This allows them to successfully undertake projects of challenging nature, that no one has attempted before.

Chris Fleming, CEO at Cyberhawk, commented: “This was a challenging but very interesting project to be part of, and demonstrates how Cyberhawk continues to innovate, break barriers and challenge limitations. Once again, our pilots have shown an exceptional level of skill by successfully capturing the data required so our engineers could produce a detailed inspection report.

“It’s important to remember that whilst drones can collect a huge volume of data, a high-quality engineering report is what makes all the difference. This allows the client to easily assess the condition of the structure and plan any maintenance based on the data. For AEP, the final reports provided 100% visual coverage of the dome with the exact sizing of defects and a 3D model of the structure. This was delivered using our cloud-based visual asset management system, iHawk, which we continue to develop as our capabilities and client base grows.”