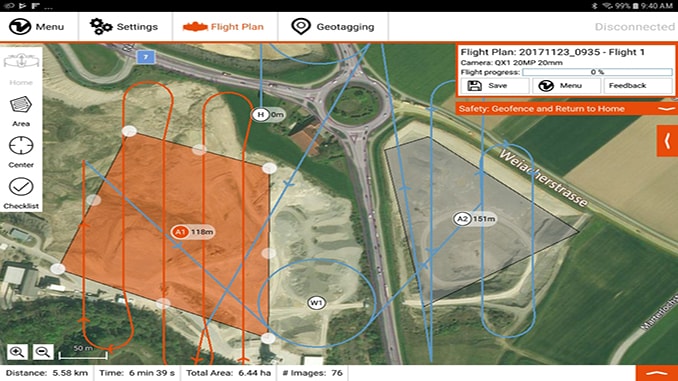 With November 2017, Wingtra brings our users a game changing software update. “The latest flight planning improvements will make a big difference for our customers. Especially those, who rely on WingtraOne for complex mapping and surveying missions in difficult terrain” – says Armin Ambühl, CTO of Wingtra. And that is true –  extended flight planning possibilities, simplified operations and increased safety makes recent WingtraPilot 1.6 release the most significant software upgrade ever.

Swap the batteries during long missions

WingtraOne already comes with an area coverage of 400 ha in a single flight. But now it is possible to fly even longer with just one planning session. With the new “Swap and Resume” battery feature, our users can plan large survey missions without worrying about the range or flight duration. During the mission, WingtraOne automatically returns to home position once low on the battery. After the battery swap, WingtraOne takes-off and resumes the Flight Path where it left, collecting the remaining aerial data.

From now on, complicated and very long missions are also much easier to execute. “Ground elevation offset” feature gives WingtraOne users the ability to plan flights in difficult conditions or above hilly terrain. Users can now predefine the elevation change and adapt to the terrain to map areas that do not lie on home altitude. For those who use aerial data for complicated research projects, we offer the possibility to add negative overlap. It helps to cover even larger areas and capture images as frequently as needed. It eases drone usage for scientific applications where artificial intelligence or machine learning is involved. Just like in wildlife monitoring.

Wingtra team has clearly understood the need for extended possibilities to post-process the aerial data. Therefore, Wingtra 1.6 release introduces the option to export Geotags (geographical identification metadata) of aerial images as a .csv file – compatible with most photogrammetry software. Thus now our customers can really choose by themselves how to post-process the collected data.

Flying further is not an issue anymore. Step by step we are improving Wingtra’s BVLOS abilities. And we still keep safety and reliability in mind! With the release 1.6, it becomes possible to extend Wingtra’s geofence for up to 8 km and fly without remote control (RC) and telemetry connection for a certain period of time. 3 km geofence still stays as a default setting but flying beyond is just as smooth.

Don’t care about the wind

With release 1.6, the WingtraOne is more robust than ever – the pre-flight safety checklist has been simplified, with some more automated checks. The WingtraOne now flies more smoothly in windy conditions while intelligent flight estimation algorithms improve handling of sensor failures. Multiple fixes improve the reliability and stability of the WingtraPilot app, ensuring seamless connectivity with the WingtraOne.

Wingtra release 1.6 is out and available for our customers as of 21st of November, 2017. Users all around the  world have already started to update and successfully test the new features. “We’re proud to continue pushing the boundaries of what is possible. Simultaneously, we keep improving robustness, safety and ease-of-use of our aircraft to guarantee fast and accurate aerial data gathering with the WingtraOne.” – adds Armin, the CTO of Wingtra.

No Replies to "WingtraPilot Release 1.6 – a Huge Step in Mission Planning"