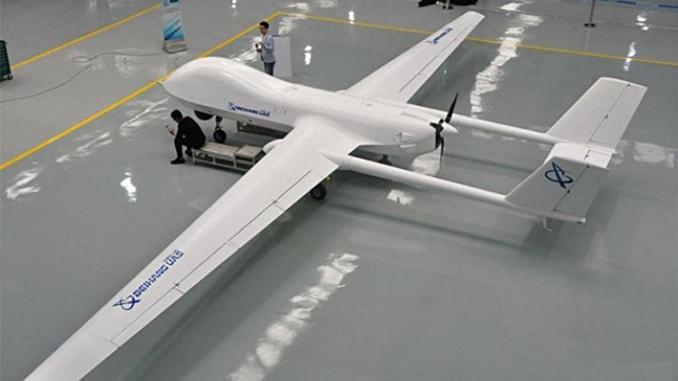 China’s Beihang Unmanned Aircraft System Technology unveiled on 13 November its TYW-1 strike-capable reconnaissance unmanned aerial vehicle (UAV) and what appeared to be a new version of the BZK-005 multirole medium-altitude long-endurance (MALE) UAV at the company’s new factory in the eastern Chinese city of Taizhou.

The TYW-1, which has a wingspan of 18 m, features the same pusher-engine, twin-boom, outward-canted stabilizer design of the BZK-005, the latter of which is believed to be in service with the People’s Liberation Army (PLA).

According to Chinese media reports, the TYW-1 can carry a 370 kg payload, features four underwing pylons, has a ceiling of 7.5 km, an endurance of 40 hours, and can reach a top speed of 200 km/h.

The UAV is also equipped with an electro-optical system that can reportedly read a licence plate 50 km away from an altitude of 5,000 m. It also features both line-of-sight and satellite navigation and control systems.

The company also displayed what appeared to be a new version of the BZK-005 featuring a system mounted under the UAV’s nose that could be electronic support measures (ESM), a radar, or a communication relay.

First revealed in a poster at the Airshow China 2004, the BZK-005 is believed to be in service with units of the People’s Liberation Army Navy Air Force (PLANAF) as well as with a special group subordinate to the Joint Staff Department of the Central Military Commission.

In early April 2016 the BZK-005 was spotted on Woody Island in the South China Sea, and in September 2013 Japan Air Self-Defense Force F-15J aircraft intercepted a BZK-005 flying near the disputed Senkaku/Diaoyu Islands.

Beihang Unmanned Aircraft System Technology is an offshoot of the Beijing University of Aeronautics and Astronautics (BUAA), which originally developed the BZK-005 together with the Harbin Aircraft Industry Group.