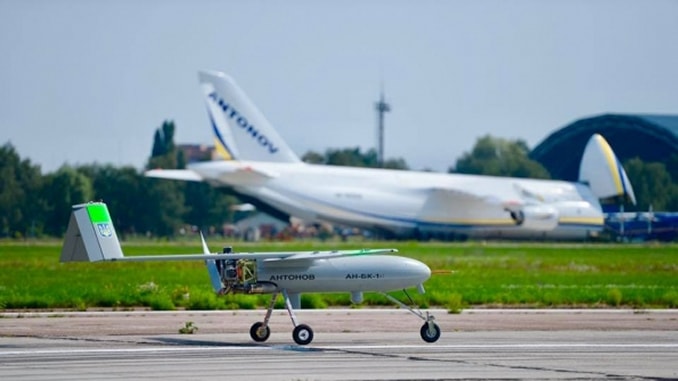 Antonov, the manufacturer some of the world’s largest aircraft has unveiled its smallest.

The company has performed the first flight tests of its BPLA tactical unmanned aerial vehicle.

With a maximum take-off weight of 200kg, the BPLA weighs in a mere 1/3200th of the weight of the six-engine An-225 Mriya. The BPLA has a similar configuration to the Textron Shadow with a twin-boom, inverted-V to act as the horizontal and vertical stabilizer.

The platform has been developed to meet the needs of the Ukrainian armed forces. The system will consist of four air vehicles, a ground control station as well as launch and landing systems.

The platforms will be used for intelligence-gathering and artillery spotting, “ensuring the effective use of mechanized brigades, missile divisions, and artillery, as well as squadrons of the army air force,” the Ukrainian company says.

Trials with the Ukrainian army are expected to take place in the spring of 2018. Antonov says it also has reached an agreement with an undisclosed foreign company to cooperate on an “aerodynamically similar” platform to the BPLA.

No Replies to "Antonov Reveals The BPLA Small UAV"