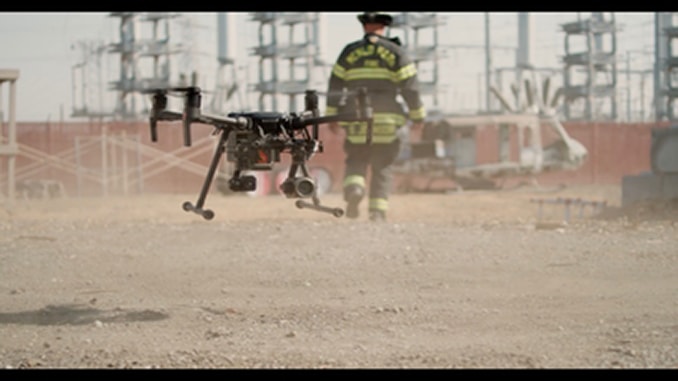 DJI, the world’s leader in civilian drones and aerial imaging technology, today formalized its ongoing collaboration with the California-based Menlo Park Fire Protection District (FPD) by designating the agency as a Solution Development Partner, dedicated to expanding the use of drones as reliable tools in emergency preparedness, response and post-incident missions.

As a Solution Development Partner, Menlo Park FPD will test customized solutions developed by DJI for the public safety sector, as part of its pioneering work to learn how best to use drones to protect lives and property. DJI and Menlo Park FPD have worked together to respond to local emergencies such as structure fires and water rescues, as well as large-scale disasters such as hurricanes Harvey and Irma and the devastating fires at Yosemite and Santa Rosa.

The Santa Rosa fire marked the first time the California Department of Forestry and Fire Protection authorized drone flights as part of the emergency response in a large-scale disaster. Menlo Park FPD used DJI equipment for more than 120 drone flights to provide situational awareness for authorities, assist with search and recovery efforts, and survey destroyed neighborhoods. This followed earlier collaborations that demonstrated how public safety agencies can use drones to quickly gather information on emergencies and provide insights to incident commanders, while safely sharing the skies with traditional public safety aircraft.

“Our partnership with Menlo Park FPD has given us valuable opportunities to see firsthand how our platforms perform out on the field, allowing us to incorporate real-life learnings into the ongoing improvement of our hardware and software capabilities,” said Romeo Durscher, Director of Education at DJI. “In just the last few months, we have seen our aerial platforms play a critical role in supporting emergency response efforts during and after a disaster, such as the Yosemite Fire, Hurricane Harvey, Hurricane Irma and the recent Santa Rosa fire.”

Menlo Park FPD is now beta-testing a new leading enterprise solution announced by DJI today, the FlightHub web-based professional drone management system, to see how it can improve fire-rescue operations. DJI and Menlo Park FPD have worked together since March 2016, with a demonstration of the DJI/FLIR Zenmuse XT camera. Since then, DJI has provided hands-on training on its aerial platforms for Menlo Park FPD personnel, and reviewed tactical approaches and implementations of DJI platforms in fire-rescue operations. Throughout this collaboration, DJI has collected valuable product feedback from various joint exercises, developed proofs of concept for customized applications of its powerful M600 professional drone, and completed several live fire training scenarios.

“Working closely with DJI the past 18 months has enabled us to better understand just how much more utility we can get from their aerial drone platforms,” said Harold Schapelhouman, Fire Chief at Menlo Park FPD. “Our collaboration in Santa Rosa produced a tremendous amount of insightful data that has helped us develop a plan of action and manage our resources more efficiently during this critical time. As they experience the pain points of coordinating disaster operations and on-site data transfer, we discover more ways in which we can push the boundaries of aerial technology to better serve the community.”

The partnership was announced today at DJI’s AirWorks Conference, an annual event that brings DJI users together to inspire, connect and energize attendees about the beneficial drone applications available to enterprises today as well as the future of the global commercial drone industry. It draws attendees from a diverse set of backgrounds who are using drones every day within the agriculture, construction, energy, infrastructure and public safety industries for three days of presentations, hands-on workshops, training sessions and networking opportunities. The conference began today in Denver, Colorado.