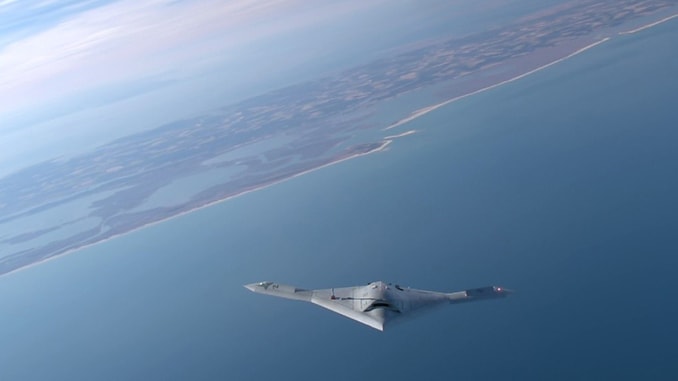 Northrop Grumman will not compete to build the service’s MQ-25A Stingray aerial refueling unmanned aerial vehicle despite being the developer of the test platform that proved a UAV could take off and land from an aircraft carrier.

Company leaders announced the decision during a Wednesday earnings call.

“When we’re looking at one of these opportunities, let me be clear, our objective is not just to win. Winning is great, it feels good on the day of an announcement, but if you can’t really execute on it and deliver on it to your customer and your shareholders, then you’ve done the wrong thing,” Northrop CEO Wes Bush said during an Oct. 25 earnings call, first reported by Defense News.
“When you’re entrusted by the U.S. or any one of our allied nations to do something in the defense arena, that’s a bond of trust that you can’t afford to break, and we really look hard at executability under the terms of [requests for proposals] that come out to make sure that we can execute.”

Bush said requirements in the request for proposal issued earlier this month caused the company to drop out of the competition. Boeing, Lockheed Martin and General Atomics are still in the running for the final Stingray design award, expected by the end of Fiscal Year 2018.

Northrop has been deeply involved with the development of a fixed-wing carrier UAV and was the company behind the X-47B Unmanned Combat Air System Aircraft Carrier Demonstration (UCAS-D) the Navy used in a series of tests in 2013 to prove a UAV could take off and land from an aircraft carrier safely.

“The dynamics and complexity of the demonstration is not just flying an airplane. It is operating a system autonomously in and out of the most demanding launch and recovery environment around the world,” then-Program Executive Officer for Unmanned Aviation and Strike Weapons Rear Adm. Mat Winter said at the time.
“This is not trivial.”

However, since the landing, the Navy’s vision for its first carrier UAV shifted from a sophisticated, low-observable, tail-less strike platform into a simpler flying refueling station for the carrier air wing.

While Bush wasn’t specific in his remarks, the shift in the Navy’s priorities for the first carrier UAV plays to the strengths of Northrop’s competitors. The X-47B had a cranked kite, flying wing design that made the shape naturally resistant to detection by radar at the expense of the fuel efficiency found in a wing-body-tail design, like that offered by General Atomics, as reported earlier this month by USNI News.

The Navy required competitors to use the service’s existing D-704 buddy tank refueling system that currently hangs from hard points on the wings of the service’s F/A-18E/F Super Hornet strike fighters.

While it’s unclear if Northrop’s intention was to use the X-47B as the basis of its Stingray design, the company has excelled in crafting flying-wing, low-observable designs such as the Air Force’s B-2 Spirit and B-21 Raider so-called stealth bombers.

In August, Aviation Week published photos of an X-47B with D-704 buddy tanks slung under each wing. The X-47B design was built around an internal payload bay, and using external hardpoints would negate some of the effects of the naturally stealthy design. 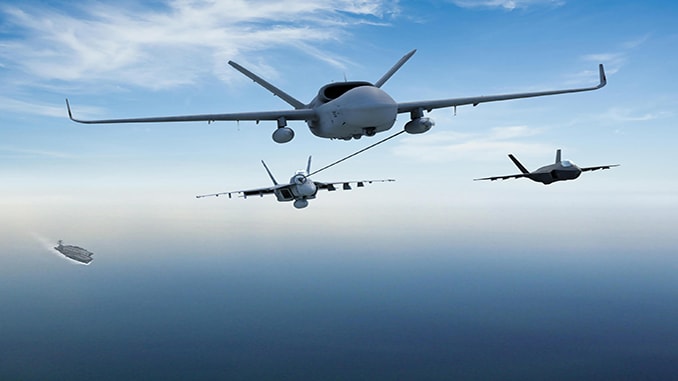 The Navy badly wants the refueling capacity of the Stingray in the air wing as soon as possible. Currently, Super Hornets are the only tankers in the air wing and that mission accounts for 20 to 30 percent of carrier sorties, accelerating wear on the strike fighters.

“The MQ-25 will be much more efficient than the Rhino (Super Hornets), and it will give us the ability to get out there and refuel four to six airplanes at range,” Commander of U.S. Naval Air Forces Vice Adm. Michael Shoemaker.
“We will not be putting any wear and tear on Super Hornets for the tanking mission, which is good. … Right now, the focus is to make it a tanker to extend the reach of the air wing and reduce some of the fatigue life expenditure on our Super Hornets. The only tankers we have in the air wing are the Rhinos.”

The service’s basic requirements will have the Stingray deliver about 15,000 pounds of fuel 500 nautical miles from the carrier, doubling the strike range of the carrier air wing’s manned aircraft to more than 700 nautical miles.

While the Navy hasn’t given a date for the introduction into the air wing, Chief of Naval Operations Adm. John Richardson wants the capability on flight decks as early as 2019.