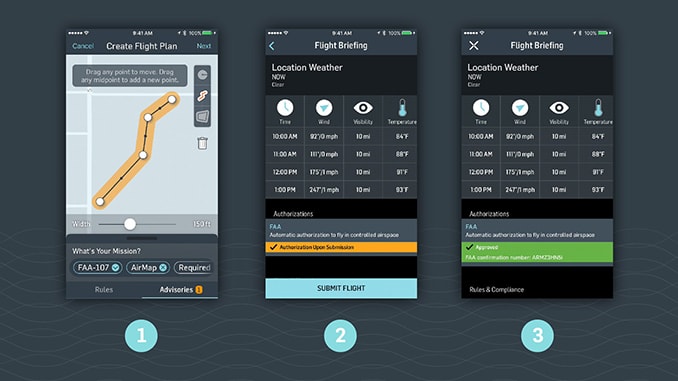 For the first time ever commercial drone operators can request automated authorization to fly in controlled airspace near select U.S. airports using the same AirMap iOS and Android applications they use today for flight planning and real-time situational awareness.

Before LAANC, waivers to fly in controlled airspace could only be obtained through a lengthy application process that can take up to 90 days. Now, drone operators have more flexibility than ever: automated authorization near participating airports takes only seconds with AirMap, even for drone operators on the go.

With the free AirMap app, any Part 107 operator can view LAANC-enabled airspace and apply for authorization. AirMap submits the request to the FAA for approval, and in seconds, notifies the operator via text and in the app’s flight briefing that the request has been approved. (Drone operators that already use AirMap should update the app to access the new authorization features.)

Drone operators can apply for two types of authorization with AirMap:

The launch of the LAANC prototype is the culmination of a year of collaborative development with the FAA and other LAANC project partners. The project was initiated through an open and competitive FAA Request for Information in 2016. Of the applicants, 12 LAANC partners, including AirMap, were chosen to participate.

According to the FAA, automating the authorization process will significantly enhance safety for all those sharing the skies. “LAANC is expected to dramatically reduce the incidence of noncompliant operations. The FAA estimates a minimum of 30% reduction in noncompliant operations would result in 450 fewer safety reports over the next six months,” the FAA stated in a recent notice.

LAANC will also help drone businesses take off: time-sensitive requests that couldn’t be completed due to the 90-day waiting period can now be approved in seconds. Drone operators will be able to fly more missions in more airspace than ever before, creating more opportunities to contribute to the U.S. drone economy, which is expected to generate 100,000 jobs and $82 billion in economic impact by 2025.

“AirMap is very excited to work with the FAA and LAANC project partners to make automated authorization a reality,” said Ben Marcus, CEO of AirMap. “Now, drone operators can use AirMap to get immediate airspace access for flights that grow their businesses and accelerate the drone economy. These four airports are just the start. We’re looking forward to bringing automated authorization to airports across the country, and we hope that we can soon share LAANC authorization with our entire developer community.”

The AirMap platform powers drones, ground control stations, and flight applications by top drone makers and hundreds of developers and industry innovators. Earlier this year, AirMap raised a $26 million Series B funding round led by Microsoft. The company also recently announced a partnership with the Kansas Department of Transportation to implement the first statewide Unmanned Traffic Management (UTM) initiative in the U.S.; a joint venture with Rakutento bring UTM services to Japan; and Europe’s first live demonstration of sophisticated U-space services in Switzerland.

About AirMap
AirMap is the world’s leading airspace management platform for drones. Millions of drones, hundreds of drone manufacturers and developers, and hundreds of airspace managers and stakeholders rely on AirMap’s airspace intelligence and services to fly safely and communicate with others in low-altitude airspace.

Learn more about AirMap at www.airmap.com.