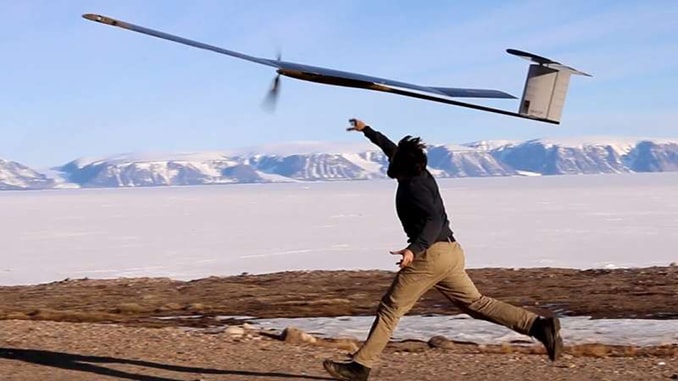 Solar-powered flying platforms have yet to prove their real-world applicability outside of targeted demonstrations. Monitoring glaciers in polar regions is in pole position to become a primary application, as the midnight sun offers ideal conditions for perpetual flights.

What better place than the Arctic for testing the new generation of solar-powered aircraft? The Autonomous Systems Laboratory ASL has developed a pioneering solar-powered unmanned aerial vehicle (UAV), AtlantikSolar, capable of flying for multiple days. Glaciologists from ETH Zurich – who use UAVs to monitor glaciers in Greenland – need further endurance to deal with the immensity of the glacial landscape. Continuous daylight conditions in the Arctic Summer provide potentially ideal conditions for a solar-powered plane, which would drastically extend the flight time of surveying UAVs.

Theoretically yes, but does it work in practice? To answer this question, we – autonomous systems scientists and glaciologists – designed a collaborative project called “Sun2Ice” to fly AtlantikSolar far north under the midnight sun.

Flying a fragile drone in a rough environment

Qaanaaq, northwest Greenland (77◦N, about 600 permanent inhabitants), is surrounded by tens of calving glaciers, reachable by airplane, and has all facilities (shop, renting house, internet, …). It is therefore an ideal place for hosting this project!

Shortly after arriving in early June, we had to face our first major issue: the sand of the landing spot identified last year was blown away by strong winds in winter time. Without any smooth, non-rocky landing site, AtlantikSolar could potentially break when touching the ground, or at minimum damage the downward facing camera payload. After almost one week of manual work to improvise a safe landing strip over Qaanaaq’s rocky terrain, another unexpected obstacle presented itself: fog started to cover the sky of Qaanaaq in a sustained fashion, with the consequence of grounding AtlantikSolar for another several days.

First-ever solar-powered flight in the Arctic

The sky finally cleared up on June 20 in the morning. At noon time, AtlantikSolar was in the air, scheduled to circle and perform the first-ever 24-hour flight of a solar-powered aircraft in the polar regions. Coincidently, the landing should therefore occur on June 21 around noon, which is not only the solstice – the best thing we could hope for with a solar-powered aircraft! – but also Greenland’s national day. This means that AtlantikSolar would establish a record during and next to celebrations in front of the Qaanaaq people, who are already intrigued by us and our strange plane.

All planets were best aligned for a unique event, the excitement was rising after each hour, and the coffee machine was working hard to keep the team warm and awake for 24 hours … until the fog came back at around 1 am, forcing the team to interrupt the mission after 13 hours of flight.

It doesn’t matter! Despite 6 hours of cloudy and windy conditions throughout the flight, causing greater than typical power consumption, the battery record shows that they remained above 60% of their capacity, indicating that even with sustained poor conditions, ~20 hours of flight would have been possible, and under less severe conditions for sure more than 24! Now, AtlantikSolar is ready to fly toward a glacier.

On the way to Bowdoin Glacier

The next non-foggy, clear-sky, and minimally windy day occurred on July 3. AltantikSolar reached the glacier within 1 hour and 15 minutes after take-off and started a photogrammetric scan of the calving front. Constantly tracked by satellite, everything looked good until unpredicted valley winds began to enter the fjord. Despite the strongest winds AtlantikSolar has ever flown in – up to 6 m/s vertical gusting and a sustained tail wind of 15 m/s, considering that its cruise speed is only around 10 m/s! – AltantikSolar successfully came back to Qaanaaq, after 5 hours and 230 km – still nearly fully charged. This last flight demonstrated the potential of this platform to monitor the cryosphere, a mission requiring the combination of long-endurance performance and payload capacity.

Most interestingly, AltantikSolar’s mapping revealed a large crevasse upstream at the front. A few days later, some glaciologist colleagues went to Bowdoin and kept monitoring the propagation of the crack, until it suddenly collapsed. All together, we now have a unique set of data – describing all the fracturing phases – for improving the numerical modelling of calving, a complex and still not fully understood mechanism, which play a major role in the sea level rise.

No Replies to "When solar-powered drones meet Arctic glaciers"