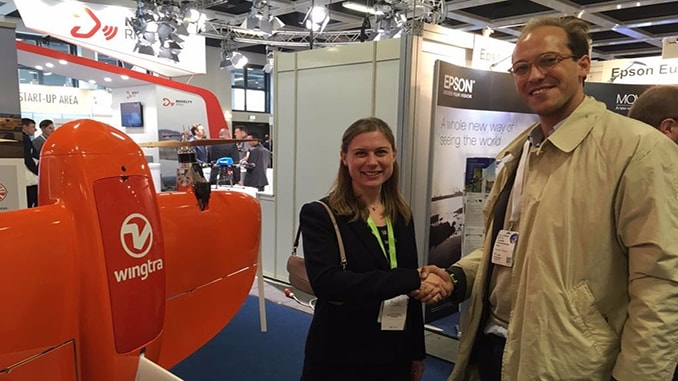 In a welcome move for professional drone users, VTOL drone company Wingtra announced its official partnership with Pix4D. With WingtraOne, Wingtra’s main product, fast emerging as an industry favorite for aerial data collection, this partnership with Pix4D aims to augment its status with a full end-to-end solution including 2D map and 3D model construction from aerial data. Pix4D’s entire software suite is now available to WingtraOne users, both directly and via Wingtra’s distributors.

“The bond between the companies was established some time ago, since realizing the potential of pairing high-resolution aerial images with cutting-edge photogrammetry modeling software. We are very happy to announce the decision to become official partners”, says Caroline Bailey, Pix4D Regional Sales Manager for Europe. Leopold Flechsenberger – Sales Manager at Wingtra – adds, “We have always aimed at providing the best survey-grade aerial imagery to our users, so Pix4D was an obvious choice from the start. From now on, Wingtra is offering a reduced price on WingtraOne drones, when bundled with Pix4Dmapper.”

Aerial Data Collection Made Efficient
Since its market entry earlier this year, Wingtra has caught the eye of professional drone users for bridging the gap between traditional multi-rotors and fixed-wings. The WingtraOne drone takes-off and lands vertically like conventional multirotors, but once in flight, the drone tilts forward to fly like a fixed-wing aircraft. Being able to carry a heavy payload such as the Sony RX1RII, the drone offers high mapping accuracy, while covering an area of 980 acres (400 Ha) at 3cm/px (1.2in/px) GSD or the equivalent of 570 football fields. The product is already in use in Europe, China, US and Australia for applications ranging from surveying and precision agriculture to glacier monitoring.

Turning Information into Insight
Wingtra’s diverse user base is well complemented by Pix4D, whose product range is aimed at the surveying and agriculture industry, amongst others. Pix4D has long been the industry leader in allowing professionals to generate high-quality point clouds, orthomosaics, surface and terrain models from aerial imagery. Some of its popular offerings include Pix4Dmapper for precisely georeferenced 2D maps and 3D models, and Pix4Dag for accurate reflectance and index maps (NDVI, NDRE).

For more details regarding the combined offering, visit www.wingtra.com.