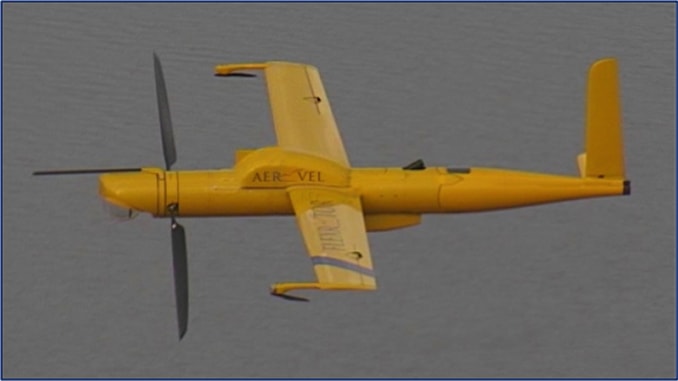 Long range and endurance are capabilities not often associated with VTOL aircraft. But Aerovel’s unmanned Flexrotor, a unique miniature tailsitter, is cut from a different cloth. Last week a Flexrotor named for the sea nymph Actaealifted off into a grey and rainy morning with 7.5 kg of fuel onboard. It transitioned from hover to wing-borne flight, and soldiered on through a showery day, a blustery night, and then another day in the breezy and unsettled air behind a cold front. As dusk fell it transitioned back to hover, and dropped gently down onto a 12-foot square helideck underway at 8 kt. Time from launch had been 32 hours and 8 minutes. More than 3 hours’ worth of gasoline remained in the tank.

Tad McGeer, Aerovel’s president, recounted that “the first day was a little turbulent, and after going through the cold front we had 20-30 kt wind and lots of convection. A sailplane pilot would have used it to good effect, but Actaea was holding constant altitude and so gave up a few percent of range fighting the ups and downs. Performance was otherwise right on expectation.”

Long endurance is Aerovel’s heritage. Dr McGeer’s own experience dates back to his Aerosonde weather-reconnaissance aircraft, which made the first unmanned transatlantic flight in 1998. Many of Aerovel’s team were with him for Scaneagle, which made the longest ship-based flight in 2004. But Actaea’sflight “has been the longest for any of us. It was 5 hours more than the transatlantic Aerosonde flight, and at a higher speed. In fact, as far as we know, no VTOL aircraft has even come close in either time or distance.” (McGeer recalls that a Royal Air Force Harrier “jump-jet” flew from central London to New York in 1969, but “it went straight to a tanker 10 minutes after launch”.)

Actaea carried a payload of 1.5 kg, which McGeer says is typical. “Most Flexrotors fly with the nose-mounted ‘05’ turret from our colleagues at Hood Technology. Actually we had a second ‘05’ Flexrotor flying formation during the first day to take close-ups of Actaea in cruise.” Alternate noses can accommodate Hood Technology’s popular “Super-EO” or MWIR day/night turrets, Trillium’s Orion series turrets, or data-relay equipment. “We’ve flown an SIGINT nose for the Navy in the Atlantic, and later this month will install a meteorological suite from PEMDAS. Perhaps Flexrotor will take us back to our roots in hurricane reconnaissance, which started us off with Aerosonde 25 years ago.”

Additional load can be carried in the removable backpack. Actaea flew a 3 kg backpack fuel tank; other backpacks provide onboard power and Ethernet for supplementary payloads. The onboard Ethernet links into the ground network, and transmits at video rate over distances exceeding 100 km.

Actaea’s launch weight was 22 kg, so lifting it out of the assembly box and into position for launch was quite manageable for one person. Small footprint and long range make the aircraft especially suited for shipboard use. It has guided a commercial seiner to yellowfin in the midst of the equatorial pacific, and a giant anchor-handler to Arctic worksites through the icy labyrinth of the Beaufort. It has even operated from an unmanned 4-metre skiff near Aerovel’s home on the Columbia river. With its capabilities and accomplishments ever expanding, Flexrotor can be expected to pop up, and down, in many another tight and faraway spot over the months and many years to come.