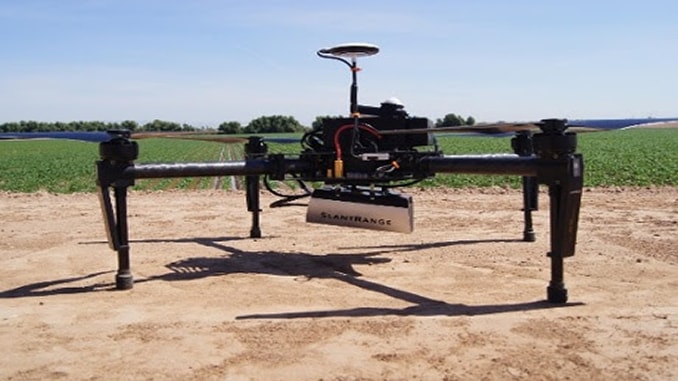 Keeping a farm up to date with the latest technology is both time-consuming and expensive.  You have to invest both money to purchase the tools and time to learn how to use them on your farm. Many farmers shy away from updating unless there is proof they will recoup their investment within a reasonable timeframe and before the next technology jump happens.

With the proliferation of drone technology and the drop in price over the last several years, aerial agronomy’s cost of investment versus return is starting to turn over.  Alex Petersen, owner of On Target Imaging, has been watching aerial agronomy and decided that this was the year he would start transitioning his farm fertility practices from traditional to precision agriculture, or as he coined it, from “Analog to Digital”.

Timed application of nitrogen fertilizer is nothing new to agriculture and many have seen the benefits it has on crop yields. Last year on their own farm, Alex, Mike, and Rick Petersen experimented with the 360 Y-Drop® nitrogen application system from 360 Yield Center to extend the available period of side-dressing and to place the fertilizer as close to the root as possible. Not only did their crop yield increase but they were able to more efficiently control the amount of fertilizer used. At the time, aside from a few test areas, the nitrogen application rate was constant across the entire field and they described themselves as being “blind” to where the fertilizer was actually needed. They knew there was still another level of efficiency to be gained by changing the application to a variable rate.  Over the offseason, the Petersen’s did their research and acquired two more tools for the 2017 growing season: a SLANTRANGE 3p multispectral sensor and the 360 Yield Center SoilScan™.  Alex used the SLANTRANGE stress maps with SoilScan™ data to implement a “base-plus” variable rate nitrogen program, which is the practice of applying fertilizer in the spring and then again at one or more stages of growth. In this article, Alex walks us through the case study from his perspective and why he believes he will gain a return on his investment on only 500 acres of corn in just one season.

Why Change? The Benefits of a “Base-Plus” Variable Rate Nitrogen Program

By Alex Petersen, On Target Imaging

The first question we asked ourselves was why change our farming from “Analog to Digital”?  The simple answer was because we believe that with precision agriculture we can get more crop with less inputs and that translates to more efficient farming. Our research and findings showed that implementation of a “base-plus” variable nitrogen program will benefit us in three main ways:

MRTN is a model that uses the cost of nitrogen versus the price of corn to suggest an optimum rate of nitrogen use. However, the kicker is that this number is constantly fluctuating over the course of the growing season. Since the MRTN changes as the markets move, a second nitrogen application gives us more flexibility to be the most efficient. With our precision agriculture tools, we’re able to time the variable rate application to minimize cost and amount used to maximize our return to nitrogen on a micro level.

We rarely see weather cooperate and two risk scenarios that a variable rate “base-plus” nitrogen program can manage better are catastrophic events and nitrate accumulation.  Catastrophic events can render our total fertilizer application as a total loss, but by using the “base-plus” program, the sidedress can be completely avoided and save about 44% of fertilizer costs. Secondly, we have to worry about the weather affecting crop growth and nitrate accumulation in the soil. Poor weather leads to stressed crops and inhibits the plant’s ability to metabolize proteins from nitrates causing them to stay in the ground. By viewing locations of crop stress from above with SLANTRANGE and monitoring nitrate levels in the soil with 360 SoilScan™, we can avoid deep nitrate accumulation by only applying the amount of fertilizer that is needed in each area. In the process, we’ve used less fertilizer and avoided high deep nitrate levels in the soil which will negatively affect our next crop, sugarbeets.

In the past, we’ve fertilized for bumper corn crops in the fall and whenever we would fall short of a bumper yield, we were left with an inefficient use of nitrogen and higher deep soil nitrate tests. This would greatly affect our sugarbeets because they are sensitive to higher amounts of nitrogen. Beets utilize a tap root system to gather water and nutrients from much deeper in the soil than corn. Ahead of a beet crop, we’ll take 4 foot samples to measure nitrate levels deep in the soil profile and what we’ve learned over the years has led us to this point: “In order to properly manage nitrate levels for our beet crops, we need to begin 1-2 years prior in the corn crops.” To succeed, we needed to raise the best corn crop with as little left over nitrogen as possible. With the variable rate nitrogen application, we can precisely control how much and where fertilizer is placed minimizing the amount of unused nitrates from the soil. With a more balanced level of nitrates in our field we expect an increase of sugar production in our beets next season.

The Process – How did we do it?

Collecting and Processing the Data

After starting with a spring application of urea totaling about 66% of planned nitrogen, we re-entered the corn fields around growth stage V9-V10 to assess the situation. Using our aircraft and the SLANTRANGE 3p sensor, we flew and mapped the first 250 acre field of corn. Taking advantage of SLANTRANGE’s efficient data collection and rapid offline processing in SlantView, we had our stress maps in about 3 hours of combined flying and processing. We then exported these maps as KMZ files and transferred them to our tablet to scout the fields. Using the tablet, Google Earth, and GPS we were able see where in the stress map we were surveying and geotag the soil samples. Over the next couple of days, we collected about 50 soil samples in areas with different stress levels and analyzed with the 360 SoilScan™.

The results showed strong correlation between the SLANTRANGE stress levels and soil nitrogen content. In the pictured field, the higher stressed red areas indicated high levels of nitrates and the low stressed green areas indicated low levels of nitrates. Agronomically, this was due to early planted corn which had struggled to emerge in certain soil types due to wet cold weather. We chose to replant a much earlier variety in these areas, and ultimately lowered our yield goals for the affected zones. We then used the correlation of stress value to soil nitrogen content and converted the SLANTRANGE stress values into a nitrogen gallon/acre application rate.  Then by combining the application rate with the shapefile, we had our prescription map for the first field.

Analysis – Applying the Process to a Second Field

The first field was about 1/4 of the area we planned to survey and sidedress so we started the same process on a second field. We expected to get similar results but what we did not expect was to be able to use the same conversion from stress to application rate as the first field. As the data was being collected and analyzed, we found that the stress map and soil data of the second field also showed the same correlation as the first field’s data. Discovering this gave us the confidence to use the same prescription conversion on both fields. By eliminating the need to reformulate a conversion, we gained a jump in our workflow efficiency. Being able to use the same prescription would not be possible if the data was not collected and analyzed with calibrated tools. The use of calibrated tools resulting in accurate data is extremely important to get the highest rate of return out of precision agriculture.

Being that this was the first time using these tools, it took about a week before we were ready to fertilize the field with our variable rate prescription. To get the prescription map into the equipment we exported the shapefiles from SLANTRANGE, imported them into our farm management software (Ag Leader SMS™), applied our stress level to gallon/acre rate conversion, and then uploaded that to our Y-Drop® applicator’s monitor. The first thing we noticed was the total amount of nitrogen being used. In the sidedress application, we estimated about a 15%-25% reduction in nitrogen fertilizer used versus what would’ve been if applying a constant rate. To us, it was important to know that the extra time this “base-plus” approach gave our operation allowed not only us to be more efficient with our fertilizer but also our money as well.

What’s my Return on Investment?

We invested both time and money into the precision agriculture tools needed to apply nitrogen more efficiently. It’s great to have all this new technology on the farm but the question we all struggled with is, “Was it worth it?” If in the end we aren’t getting a return on our investment, it was wasted effort and for a farmer that’s unacceptable. Fortunately though, that is definitely not the case here. We believe that on just 500 acres of corn, the upfront cost of using a variable rate “base-plus” nitrogen program, or as we like to say going “digital”, will have been paid off. Below we show you the numbers and our estimates. For our estimates, we’re using the liquid nitrogen price of $0.32/lb and 500 acres.

Thankfully though, Mother Nature cooperated and we were able to apply the second application. From our data, we estimate that in our variable rate sidedress we’re using 15%-20% less nitrogen fertilizer and saving about 30-40 lbs/acre, which amounts to $9-$13/acre. In addition, looking forward to harvest time, we also anticipate healthier corn and estimate an increase in our crop yield of about 10 bushels/acre. Combining the cost savings of less fertilizer with higher yields, we’re looking at an increased profit estimate of $35/acre or a total of $17,500 across 500 acres of corn. In this scenario, we have recouped our investment in going to “digital” farming by increasing our profits.

For us, the answer on when to go from “analog” to “digital” farming is today. In one growing season, we estimate that we will come out positive on our investment in implementing a “base-plus” variable rate nitrogen program. The hard proof will come during harvest in October when we get the yield and revenue numbers, but we are confident we made the right decision. The use of agriculture drones and remote sensing in precision agriculture allowed us to apply the 4R’s (right source, right rate, right time, and right place) of fertilizer on a micro level and achieve higher efficiency farming. With SLANTRANGE and 360 SoilScan™ we’ve opened up the ability to manage fertilizer by spending our money a little bit at a time during the growing season versus all up front and are converting efficiency into dollars.

Want to learn how SLANTRANGE can help your business?

Check out our website to learn more about our sensors and analytics, review our FAQ, and explore our online store. Or click below if you’d like to set up a call with one of our experts. We’re happy to help!

No Replies to "Knowledge Base Presented By SLANTRANGE "Using Agriculture Drones""