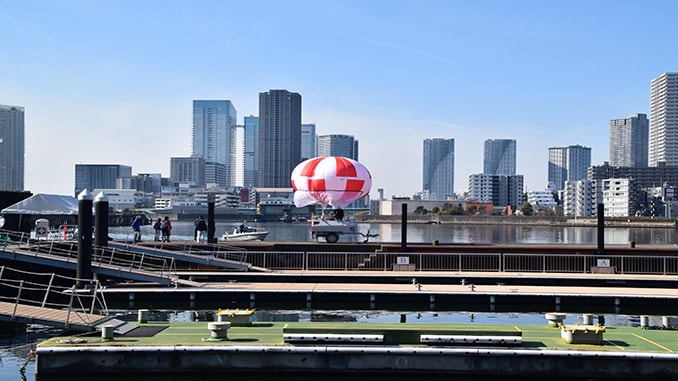 The Skystar 180 is a small-sized mobile aerostat, designed for tactical mid-range surveillance and public safety, as well as for police and military applications. The Skystar systems already accomplished more than 1 million operational hours worldwide, offering the availability of over 85% in any given area. Based on a towable trailer, the system has a stabilized day/night electro-optical payload suspended from a helium-filled aerostat, tethered to a ground system. It operates continuously at wind velocity of up to 40 knots, and can lift a payload of up to 20kg, providing surveillance coverage from an altitude of up to 1,000 ft. for up to 72 hours, after which it is brought down for a 20-minute helium refill. Only 2 people are required to fully maintain the system. Skystar 180 is Ideal for securing massive public events, and was successfully deployed during the Tokyo 2017 marathon, as well as during previous Olympic Games and during the FIFA World Cup in Brazil. Recently, the Skystar 180 system was deployed during Pope Francis&#39; visit to Columbia. In Israel, The Skystar 180 was deployed during the concerts of Justin Timberlake and the Rolling Stones, securing tens of thousands of fans. The Skystar 180 system is also an ideal mean
to support VIP security. For example, the system was deployed during President Trump&#39;s visit to Israel, during Pope Francis visit to Jerusalem and to Africa, during the Paris climate summit (COP 21), and twice during the G8 Summit (Russia, Canada).

In addition to public safety and VIP security, the Skystar 180 system is also optimal for search and rescue as well as for border protection missions, and is being used continuously by the IDF on the border with the Gaza Strip. In the US, the Skystar 180 system was chosen to be one of the approved technologies for purchase in the annual AEWE (Army Expeditionary Warrior Experiment) conducted by the US Army.

Rami Shmueli, CEO: Skystar systems were successfully deployed during previous Olympics games, and I am certain that they are an ideal security solution for the Tokyo 2020 Olympics games as well. Aaerostats provide
persistent surveillance for long periods of time at a very minimal cost. No other defense system, manned or unmanned, is as cost effective as aerostats. We are honored to participate at SEECAT for the second time, and present our renowned Skystar family of aerostats, which have accumulated more than 1 Million operational hours worldwide.

GA-ASI Transitions to An All Gray Eagle Extended Range Production Line for the U.S. Army

No Replies to "Skystar 180 Aerostat, Successfully Deployed In Japan During The Tokyo Marathon"