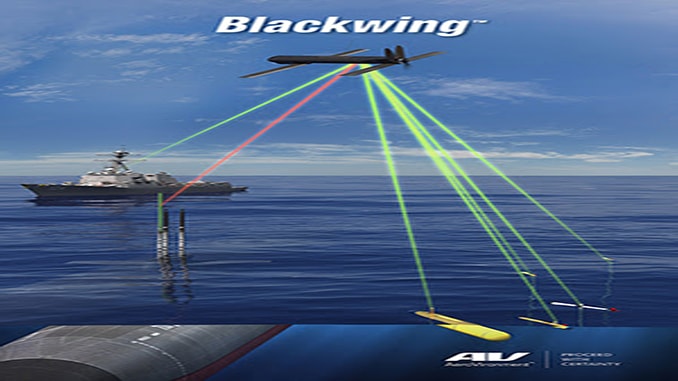 AeroVironment, Inc. , a global leader in unmanned aircraft systems (UAS) for both military and commercial applications, today announced the receipt of a contract award from the United States Navy on September 29, 2017 for continuation and expansion of its Blackwing™ small Unmanned Aerial Vehicles (UAV) program.The contract includes orders for multiple Blackwing vehicles, sensor payloads and refurbishment kits for a total value of $2,578,822. The initial set of vehicles are anticipated for delivery by May 2018, and final delivery anticipated by November  2018.

Blackwing is a small, tube-launched unmanned aircraft that employs an advanced, miniature electro-optical and infrared (EO/IR) payload, integrated inertial/ GPS autopilot system and secure Digital Data Link (DDL), all packaged into a vehicle that launches from under the surface of the sea, from manned submarines and unmanned underwater vehicles (UUVs).

Blackwing builds on AeroVironment’s extensive operational experience with small UAS and its Switchblade® Lethal Miniature Aerial Missile System (LMAMS) to provide the Navy with a low-cost, submarine-launched UAS optimized for denied   environments. AeroVironment developed the Blackwing system as part of a 2013 Navy and United States Pacific Command (PACOM) sponsored Joint Capabilities Technology Demonstration (JCTD) called Advanced Weapons Enhanced by Submarine UAS against Mobile targets (AWESUM). This JCTD was completed in September 2015 with a strong recommendation to transition the capability into the fleet.

“Blackwing can also be integrated with and deployed from a wide variety of surface vessels and mobile ground vehicles to provide rapid response reconnaissance capabilities to help warfighters proceed with certainty, even in the most challenging settings, helping to ensure safe and successful missions,” Flittie said.

“AeroVironment’s small UAS – including Raven®, Puma™ AE and Wasp® AE, as well as Switchblade® loitering missile and its variants – continue proving their life-saving value with U.S. forces and increasingly with our allies around the world as our international footprint grows. We now count more than 40 countries outside of the U.S. as customers for our family of small UAS,” he added.

The Naval Undersea Warfare Center, Division Newport (NUWCDIVNPT) awarded this contract to AeroVironment, the only manufacturer of the Blackwing UAS, on a sole source basis in accordance with Federal Acquisition Regulations (FAR) guidelines.