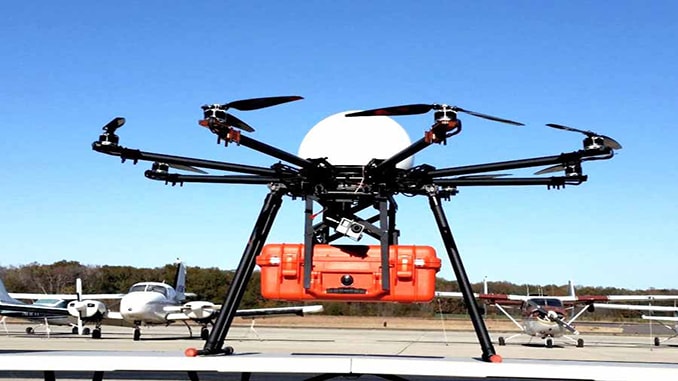 This latest version of the HiRO drone is currently being tested to support the Mississippi Department of Emergency Management, Homeland Security, the National Guard and NATO. It is expected to be production-ready in early 2018. Italo Subbarao, DO, senior associate dean at William Carey University College of Osteopathic Medicine and Guy Paul Cooper Jr., DO, developed the telemedicine system after studying the medical response to an EF-4 tornado that struck Hattiesburg, Mississippi in February 2013.

“Recent catastrophic events illustrate the challenges of getting life-saving treatment to disaster victims, particularly when first responders can’t get there quickly by ground,” said Dr. Subbarao, a disaster medicine expert and emergency medicine physician. “Our goal, as osteopathic physicians, is to bridge that delay by delivering rapid treatment directly to the victims, using remote physicians to instruct anyone on site.”

“We focused on making sure our interface and medical kits are intuitive for both the remote physician and the person at the scene. Safety and simplicity are top priorities because we’re working to saves lives in very high stress situations,” said Dr. Cooper. “The HiRO telemedical drone provides immediate access to a physician through a wireless video connection. When the portable critical care kit arrives, the doctor appears on a touchscreen display to direct medical treatment.”

The kit includes smart glasses, which allow a person at the scene to move away from the kit while maintaining audio and visual contact with the physician. Holographic technology lets the physician to see the disaster scene and direct care through a hands-free, motion-enabled augmented reality headset.

Drs. Subbarao and Cooper partnered with Dennis Lott, director of the local unmanned aerial vehicle program at Hinds Community College in Mississippi, to design and build a next generation disaster drone to carry the telemedical packages. That drone is currently being field tested.

“These drones have impressive lift and distance capability, and can be outfitted with a variety of sensors, such as infrared, to help locate victims,” Lott said. “It is just a matter of time before the drones become part of routine life.”

1 Reply to "Next Gen Drone Integrates Holographic Technology to Connect Doctors, to Survivors"