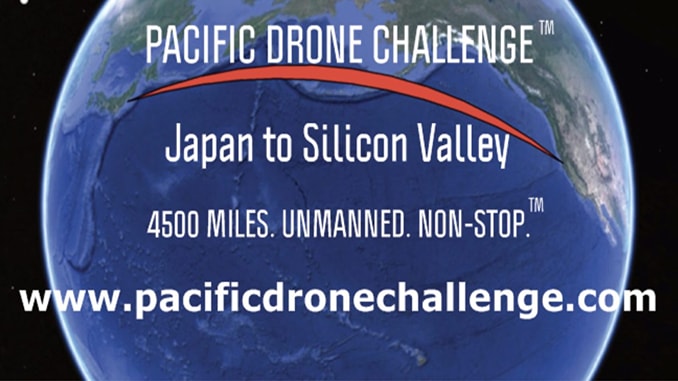 Two competing teams from the United States and Japan will fly their drones across the Pacific Ocean to test the endurance and capability of their vehicles to fly long distances – unmanned. The event, dubbed the “Pacific Drone Challenge” will pit the technology of an American team – Sabrewing Aircraft Company in the Silicon Valley against the capabilities of a Japanese team – iRobotics of Shinjuku, Japan. Both teams will compete to see who can make the crossing from Japan to the Silicon Valley first.

“We’ve been working on a heavy-lift, mid-altitude, long-endurance unmanned aircraft system (UAS) for several years,” stated Ed De Reyes, the Chief Operating Officer of Sabrewing Aircraft. “This race gives us the ability to demonstrate our system…and to make some history as well,” he stated.

While there have been endurance records set and broken by various teams in recent memory, none have combined distance, endurance and unmanned operations in one event. Most recently, a manned, long-endurance aircraft known as the Solar Impulse flew around the world for a total of 22,915 nautical miles (42,438 km), making 17 stops along the route and amassing 558 hours of total flight time. Two pilots onboard the Solar Impulse took turns flying the aircraft during the entire route. There have been other long-endurance aircraft that have flown non-stop around the world as well. Most notably, the Voyager aircraft flew non-stop from Edwards Air Force Base in the Mojave Desert in 1986 – also with two pilots on-board.

“The difference between what we are doing and what has been done before is significant.” De Reyes continued, “We are flying 4500 miles (8300 km), over open-ocean, without a pilot on board, for 45 to 50 hours. We are flying that distance for that amount of time on a fraction of the size and weight of other similar aircraft, and at a fraction of the cost.”

One other striking difference is that the Sabrewing team is building a UAV that has other applications besides a vehicle that can fly long distances – they are also building in autonomy, high-altitude capability, and more importantly, heavy payload capacity. Sabrewing is also using advanced laser “sense-and-avoid” technology, as well as a unique computer — designed and programmed by graduate students from California State University Channel Islands – that integrates all the sensors into a single, artificial-intelligence-based system that enhances safety by autonomously avoiding obstacles as small as birds.

Companies currently providing technology solutions in the industry are also aware of the fact that the Pacific Drone Challenge™ is making history: Sabrewing is being sponsored by several well-known and established companies in the autonomous air vehicle field – including such companies as Yuneec, FLIR, Cobham Satellite and Inmarsat, to name a few. While these companies are sponsoring ‘in-kind’ hardware and software, Sabrewing is looking for financial help to reduce the cost of taking on the Challenge.

“Competitions have always proven the old saying that necessity is the mother of invention,” stated De Reyes. He continued: “In this instance, the object is not only to show what our air vehicle can do, but to then re-use all the technology that we’ve developed to demonstrate how long-range, heavy-cargo deliveries can be made autonomously. Just as Lindbergh proved that flying non-stop across the Atlantic was feasible for mail and passenger aircraft, we’ll be proving that we can do the same thing with an aircraft that doesn’t have a pilot aboard.”