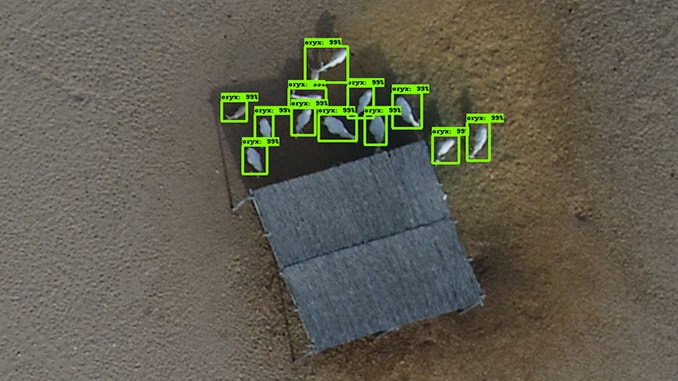 FlytBase Announces The Release Of Its AI Platform For Drones

FlytBase Inc. a startup building developer platforms for connected intelligent drones, today announced the release of its AI Platform for Drones. FlytBase has built the world’s first IoT platform for commercial drones, the “Internet of Drones” (IoD) platform. Continuing on its mission to bring intelligence and connectivity to commercial drones, FlytBase is now extending its cloud and edge compute platforms to incorporate AI and machine learning.

As drones continue to find use in wide range of commercial applications, the focus is shifting towards higher levels of automation and tighter integration of drones with business processes, for significantly improved efficiencies. Recent advances in AI have enabled computers to makes sense of the visual data around them, almost reaching human-level performance in some cases. Some of the tasks enabled by these algorithms, include:

The technological potential of drones is being further enhanced by combining autonomous drone tech with AI. Computer vision systems, mounted on drones, enable them to gather rich visual data either in the form of photos or videos. Processing this data using AI unfolds unique perspectives and information, which otherwise would be either impossible or very expensive to derive using traditional techniques involving human effort.

With the vision to leverage AI for drone applications, FlytBase platform is being further extended to incorporate AI capabilities to process aerial image data.

FlytBase AI platform is based in the cloud, wherein the entire workflow of preparing datasets, training models and deploying trained-models for inferencing has been automated. This enables quicker turnaround time and faster iterations when a use case is being worked upon. Being in the cloud also helps in scaling the system up at runtime when demand (either for training or for real-time inferencing) increases.

Examples of use cases that can be automated with FlytBase AI platform, are:

To harness FlytBase AI platform capabilities, customers bring in their use-case to FlytBase, along with sufficient training images dataset. 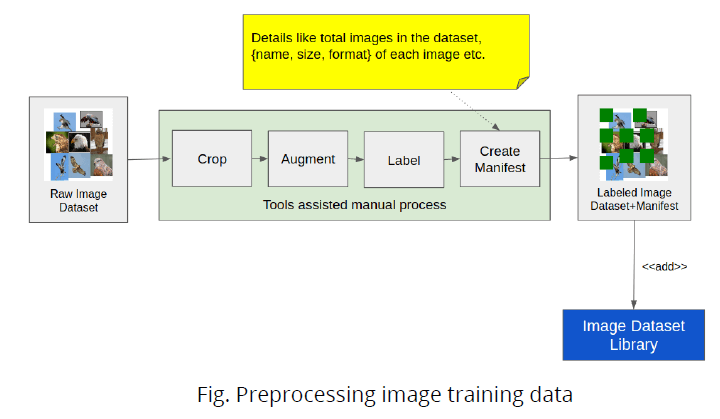 The customer provided data is carefully cropped, labeled and packaged for training purposes, and added to an Image Dataset Library. 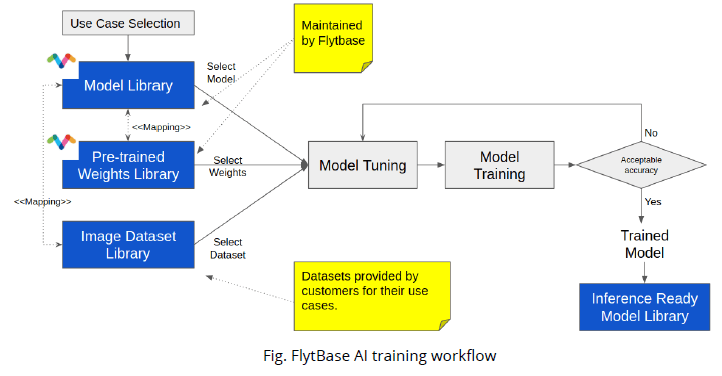 Via the above workflow, the user can select various pieces of the training pipeline and initiate training on one of our GPU enabled cloud to compute nodes. This results in a trained model ready for inferencing.

Once our model is trained, it is deployed on the platform for direct use by our users. Users can do live inferencing either via our web console or by using REST API’s exposed by the platform. REST APIs have the added advantage of integrating this platform with customer’s system for further automation.

FlytBase AI platform is designed to support multi-tenancy, which enables utilization usage of resources, and hence cost savings for our customers.

At the heart of the image-processing pipeline are state-of-the-art CNN models employing recent advancements in computer-vision and deep-learning.

Over the last few years, several object detection models have been published, which have significantly improved upon the previous generation, in terms of accuracy and speed of inferencing. Notable are, SSD, DetectNet, Fast R-CNN, Faster R-CNN, Yolo and Yolo V2.

Similarly, for image classification, ResNet50, VGG16/19 and Inception models are some of the most preferred models. Some models have better accuracy, while others might be faster at inferencing than others. Selection of a model takes into account these criteria, tailored to customer’s use case.

The FlytBase AI platform is agnostic to the particular framework in which the models are implemented (Tensorflow, Caffe, Theano etc. ), by virtue of an abstraction layer. This allows the platform to assimilate the best implementation of cutting-edge models coming out of research labs, with ease.

FlytBase AI platform is optimised for interpretation of drone data, and it seamlessly integrates with the rest of FlytBase platform to offer connectivity with your business applications.

If you are looking to leverage machine-learning technology for automation of your drone data-processing, please reach out to our experts at support@flytbase.com or
signup at flytbase.com/ai