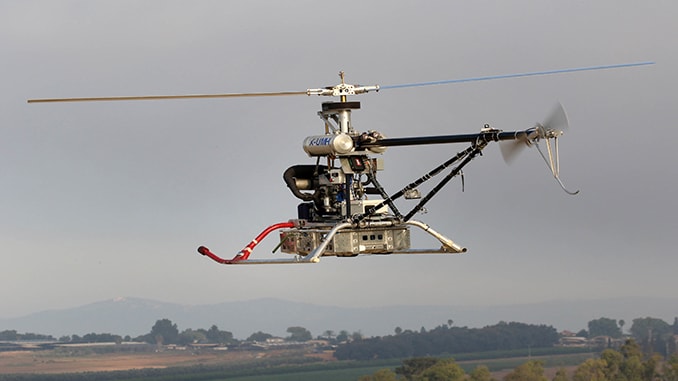 Israel Aerospace Industries’ (IAI) Unmanned systems have successfully completed a proof of concept to high officials of the defense industry and the IDF. Recently developed by Israel Aerospace Industries (IAI) the Air Hopper took a part in a demonstration that covered two scenarios, one simulating carrying a seriously-wounded soldier to a extraction point for life-saving treatment, airborne monitoring of vital signs and real-time dispatch to the ground. The second scenario simulated carrying logistic supplies to an isolated force at the front line, which could not be accessed otherwise without risking more troops.

As an unmanned helicopter used mainly to provide fast logistic supplies to sites where ground access is difficult
or dangerous, the Air Hopper is based on a small, manned helicopter with a payload of 100-180 kg (depending
on the model), flight time of two hours and speed of up to 120 km/h. the Air Hopper runs on an internal
combustion engine which uses ordinary, 95-octane fuel and its price is considerably lower than that of a manned
transport helicopter. This allows procurement of multiple unmanned helicopters to achieve flexible deployment
and low-cost provisioning to the front lines while significantly mitigating the risk to human lives.