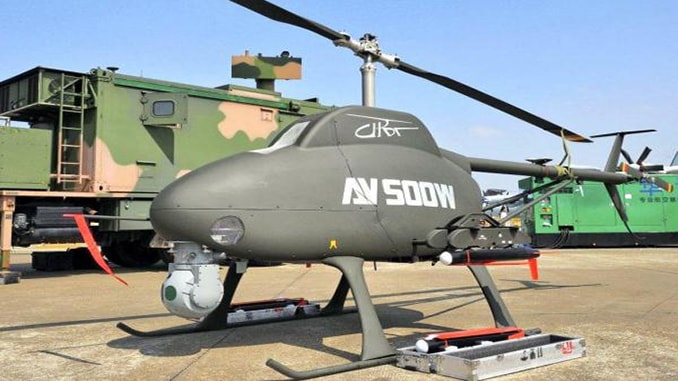 China is displaying its unmanned reconnaissance and attack helicopter to possible foreign military buyers at an exhibition in Tianjin.

The aircraft is the AV500W, a 24.6-feet long autonomous aircraft developed and produced at the AVIC Helicopter Research and Development Institute.

The drone has a flight ceiling of about 13,000 feet, a maximum speed of about 105 miles per hour and a flight endurance of four to eight hours, depending on variant. It is capable of carrying nearly 265 pounds of weapons and equipment, the state-owned China Daily reported.

“The helicopter is able to take off and land on almost any landform including plateaus and canyons. It can operate in cold and tropical environments. It will be useful in border patrols, counterterrorism operations, and low-intensity conflicts … ,” said Jiang Taiyu, one of AV500W’s chief designers.

Jiang said the aircraft will be ready for mass production in 2018.