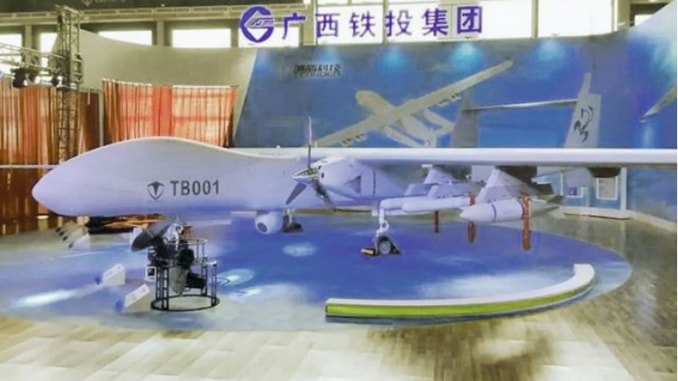 One of the platforms displayed in the southern Chinese city was the TB001 ‘Twin-tailed Scorpion’, which the company claims is the only Chinese twin-engine, twin-boom unmanned aerial system (UAS) on the market.

Equipped to conduct satellite control linkage and carrying an electro-optical targeting sensor under its fuselage, the exhibited TB001 also has two underwing pylons that can be fitted with dual launchers for small missiles or bombs.

Each pylon can reportedly carry up to 100 kg of ordnance.

The TB001 was marketed alongside weapons developed by the China Aerospace Science and Technology Corporation (CASC) under the latter’s ‘FT’ series. A Tengoen illustration at the exhibition also showed the UAV armed with eight Norinco Blue Arrow ground-attack missiles.

Tengoen also unveiled a smaller single pusher-engine UAV called the TA001, which features two underwing weapon pylons and an electro-optical targeting sensor. According to information provided at the show, the UAV has a maximum take-off weight of 1,200 kg and can fly for up to 24 hours.