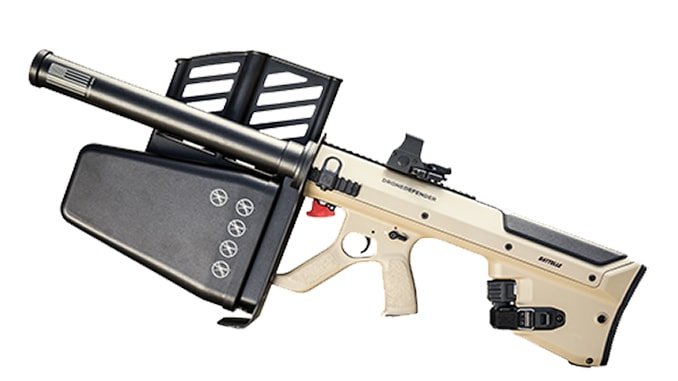 The DroneDefender® V2 device is a safe, effective, and proven way to defeat intrusive or threatening Unmanned Aircraft Systems (UAS), also referred to as drones. Several hundred units of DroneDefender have been sold to the United States Department of Defense and the Department of Homeland Security to defend airspace against drones without compromising safety or risking collateral damage. Watch it in action here.

The DroneDefender device is a handheld, man-portable, UAS defeat solution which disrupts both the command and control link between the UAS and pilot, and the GPS link of small, commercial-grade UAS.

The new ergonomic design has miniaturized the electronics and integrated them into the handheld unit for a sleek new look and enhanced simplicity. The DroneDefender V2 has simplified the operation of the system by reducing to only one trigger with the use of a multifunction selector switch. The improvements also extend its proven and demonstrated range with enhanced effectiveness against an even wider set of drones.

“Our original solution was a rapid prototype solution. It was made with commercial off the shelf (COTS) parts and delivered a needed solution to the field quickly,” said Dan Stamm, manager of Battelle’s Counter UAS programs. “That bought us time to develop a custom design based, in large part, on user input and feedback from the field.”

“Adversaries continue to rapidly evolve their drone threats—including shifting to the newest drones available,” said Alex Morrow, a co-developer of the DroneDefender device along with Stamm. “We’re constantly evolving our solution to stay ahead of those threats and protect our troops and assets in the field.”

Units have been sold, and are available to be sold, internationally subject to federal government approval.

Every day, the people of Battelle apply science and technology to solving what matters most. At major technology centers and national laboratories around the world, Battelle conducts research and development, designs and manufactures products, and delivers critical services for government and commercial customers. Headquartered in Columbus, Ohio since its founding in 1929, Battelle serves the national security, health and life sciences, and energy and environmental industries. For more information, visit www.battelle.org.