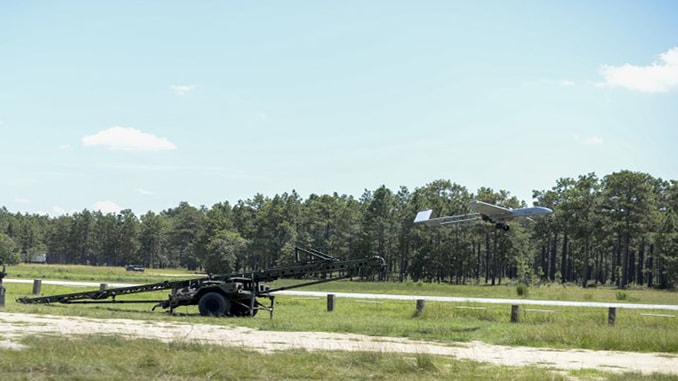 This newest version of Unmanned Aerial System (UAS) is visually similar to the previous model, but with several upgrades including longer flight durations.

“The Shadow as a platform brings reconnaissance, surveillance and target acquisition, which gives us capabilities for our military intelligence company in support of the 30th Brigade,” said Chief Warrant Officer 2 Stephen Isaacs, the Detachment 1 commander. “The V2 gives us a much larger range. It gives us a longer flight time, which also gives us more time to be on target.”

In addition to the increased range, the new version of the Shadow also meets the requirements of a new NATO regulation that requires all unmanned aircraft to have a certain level of interoperability and communications security.

Sgt. Joseph Patton, a unit trainer and operator with Detachment 1, is happy about the improvements to the aircraft.

“It’s absolutely better,” said Patton. “From flying unmanned aircraft down-range and in combat, there have been instances of other people being able to see our feed and our video and this is going to completely mitigate that. This will keep our capabilities to us.”

Although Detachment 1 only has the Shadow, it is part of a new universal system that gives operators the ability to control more than one type of UAS.

“It’s a part of NATO’s system to have that universality so we will be able to help our fellow NATO forces in the future,” Isaacs said.

The NET gave the Soldiers a chance to learn about the new aircraft without the limitation of time they face on most drill weekends, where it takes three-quarters of a day to set up the airfield.

“There are guys who have gotten more training during this NET than they’ve had all year,” said Patton.

The additional training was not easy. The Soldiers had to battle a hot North Carolina summer with afternoon thunderstorms that kept them from flying, and they had to re-learn the new system.

“The hardest part was definitely changing they way we’ve been doing something for eight, sometimes 12 years for some of the operators,” Patton said. “When you do this for so long you have a flow and you do the same flow every time and you get the aircraft in the air, and now it’s changed.”

Patton said all the troubles were worth the effort.

“There’s been growth not just in our flying capabilities but also in our operations,” he said. “It’s always exciting to get that first bird up, every time. Whether it’s a drill weekend or annual training. There’s a lot of work getting it set up, but every time that bird leaves the rails for the first time, that means everything you just did was validated.”