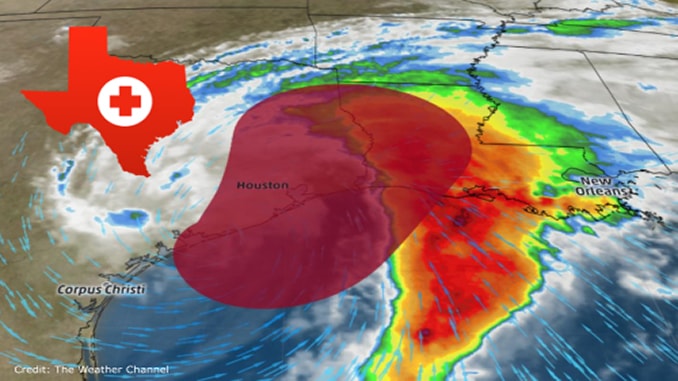 “In an emergency like this, it is great to have eyes overhead to help map out safe routes and work with ground crews in search-and-rescue efforts. We are glad to be able to provide services that help the disaster response crews in the face of this massive, natural disaster” said Vigilant Aerospace CEO, Kraettli Epperson.

The Red Cross unmanned aircraft response team, organized by the unmanned aircraft flight company PropellerHeads Aerial Photography, is flying with an FAA Certificate of Authorization (COA # 2017-AHQ-049-P107) allowing for drone operations in the Houston area – which is currently under FAA flight restrictions due to the emergency relief efforts. Flight operations are being coordinated with the Texas Air Operations Center and Unified Command.

Epperson, an FAA-licensed Part 107 unmanned aircraft pilot, is in Houston working with the disaster response teams and operating the situational awareness and detect-and-avoid system for the drone flights.

“The big advantage of the FlightHorizon approach in incident response is that it is highly portable, can be run on a laptop with a small antenna to cover a large operational area and can provide immediate situational awareness for most aircraft. Because it uses existing air traffic control protocols and infrastructure, it requires no coordination or authorization to provide instantaneous integration for unmanned aircraft into the airspace,” said Epperson.

Tuesday, August 29 at 8:00 PM, the Weather Channel reported that Tropical Storm Harvey has “set a preliminary Lower 48 U.S. rainfall record for any tropical storm or hurricane as it continues to soak the upper Texas coast and Louisiana, worsening record-breaking, catastrophic flooding” (Link). The area is expected to continue to experience periods of torrential rain through the end of the week with continued flooding.

“If either of these are confirmed, it would be the heaviest storm-total rainfall from any tropical cyclone in the continental U.S. in records dating to 1950” according to meteorologist David Roth (Link).

#Harvey‘s catastrophic rainfall was enough to push it to #2 on the list of record-setting US tropical rainfalls. pic.twitter.com/zyvjppyxsK

The Red Cross Response to Harvey

From the website:
The American Red Cross Texas Gulf Coast Region provides service in the following main areas: disaster relief and preparedness education; assistance for military personnel, veterans and their families and health and safety courses. The Red Cross operates under an unfunded congressional mandate and relies on financial donations and grants. For more information, visit www.RedCross.org/local/texas/gulf-coast.

Vigilant Aerospace Systems, Inc. is a provider of industry-leading next-generation flight management and safety systems for both manned and unmanned aircraft. The company’s software platform, FlightHorizon™, is based on an exclusively licensed NASA patent and provides situational awareness, synthetic cockpit views, collision avoidance and other flight information to enable integration of commercial drones into the national airspace.