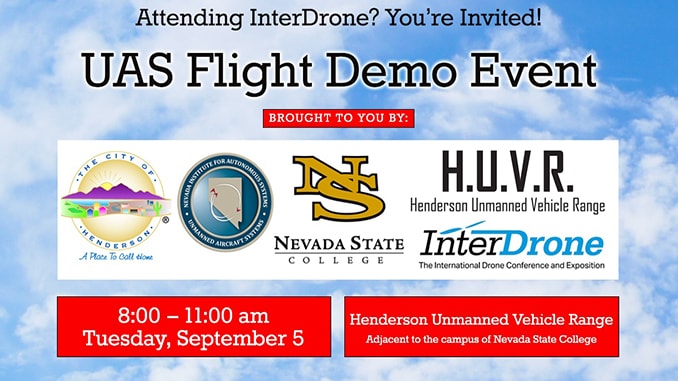 In collaboration with InterDrone the Nevada Institute for Autonomous Systems (NIAS), Nevada State College (NSC) and the City of Henderson are promoting unmanned aircraft system (UAS) demonstration flights at the Henderson Unmanned Vehicle Range (HUVR) in advance of InterDrone.  The demonstration flights will be coordinated by NIAS and conducted at HUVR located at NSC.  Several commercial UAS companies will demonstrate different flight profiles and operations during the event.  The flight demonstrations will be conducted from 8:00 – 11:00 AM PST on Tuesday, September 5th.   Individuals from local industry, InterDrone attendees and exhibitors are invited to attend.

“InterDrone is a great show for the commercial UAS industry,” said Mark Barker the Director of Business Development and Marketing for the NIAS.  “It’s a perfect opportunity for us to showcase the new urban UAS test range in Henderson at Nevada State College, and to foster the on-going relationship with InterDrone and the state of Nevada.”

“We are excited to be partnering with HUVR, the Henderson Unmanned Vehicle Range, to allow some of the thousands coming to InterDrone 2017 to experience the latest commercial drone technology up close and in real flying conditions,” said Ted Bahr, Chairman and Founder of InterDrone, the largest dedicated commercial drone show in North America.

“Having HUVR on the NSC campus allows our students to engage in state-of-the-art data analytics. While UAS provides a unique platform to capture data, what is more important is making sense of the information. We want our students to participate in this field,” said Andy Kuniyuki, Dean, School of Liberal Arts & Sciences at NSC.

The HUVR UAS test range is being developed in cooperation with the city of Henderson, NIAS and NSC for the purpose of facilitating commercial UAS testing, development and training.  HUVR offers an urban area with easy access, facilities and open airspace.

About InterDrone: InterDrone is the largest commercial UAV trade show and conference in North America. Occurring annually in Las Vegas, the 2016 show attracted 3,516 attendees and 155 exhibitors. Learn more at www.InterDrone.com

About the Nevada Institute for Autonomous Systems (NIAS): The Nevada Institute for Autonomous Systems (NIAS) and FAA-designated Nevada Unmanned Aviation Test Site leads the growth of the Nevada Unmanned Aviation Systems (UAS) Industry through business teaming relationships, collaborating with primary research institutions on UAS research and development, and enhancing the Nevada UAS Industry knowledge base to attract new and permanent business and create jobs in the State of Nevada. Learn more at www.nias-uas.com

About Nevada State College: Nevada State College, a four-year public institution, is a member of the Nevada System of Higher Education. NSC places a special emphasis on the advancement of a diverse and largely under-served student population. Located on a developing 500-acre campus in the foothills of Henderson, Nevada, the college was established in 2002 as a new tier in the state system between the research universities and the two-year colleges. In this role, the college emphasizes high-quality instruction, exemplary service, engaging learning experiences, and innovation as a means to more efficient, effective outcomes in all corners of the campus. Since 2002, Nevada State College has grown to offer more than 45 majors and minors, has received independent accreditation and has expanded its physical campus. Committed to fostering a personal learning environment, students are taught by faculty who serve as mentors and guides in classrooms with an average class size of only 18 students. Nevada State College serves approximately 3,700 students and has over 3,000 alumni, each representing a broad array of cultural and economic backgrounds. For more information, visit http://nsc.edu.

About the City of Henderson:

Incorporated in 1953, Henderson is Nevada’s second largest city with more than 302,000 residents. Henderson is a premier city, nationally recognized for its stunning parks, trails, master-planned communities, outstanding quality of life and patriotic past. Recognized as one of America’s Best Places to Live (MONEY: 2012, 2008, 2006 and Liveability.com: 2013), one of America’s Best Cities (Business Week), and being a safe community (Forbes: 2nd safest in 2011, InsuranceProviders.com: 6th in 2012, Law Street Media: 6th in 2013,) and a Bicycle Friendly Community (League of American Bicyclists), Henderson is a progressive and vibrant city committed to maintaining premier amenities and services.