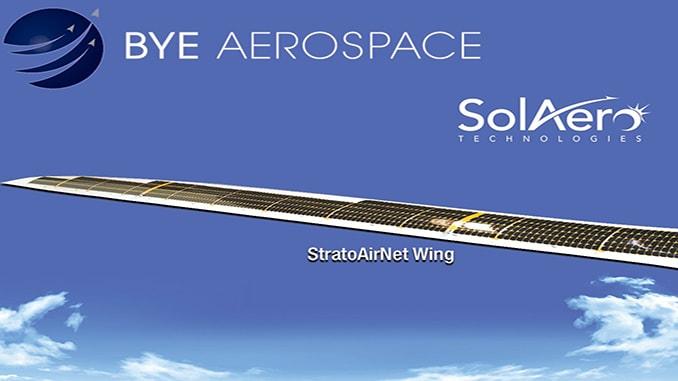 The Bye Aerospace “StratoAirNet” family of “atmospheric satellites” are intended to provide support for commercial and government security requirements. The SolAero and Bye engineering teams have worked collaboratively to accomplish this milestone event. The initial medium-altitude StratoAirNet 15 proof-of-concept prototype is nearing completion and undergoing final assembly. Final assembly and integration of the wings and power systems integration of the 15-meter wing span solar-powered StratoAirNet are planned to begin in November 2017, with ground and flight tests to follow from their new facility at the Northern Colorado Regional Airport near Loveland and Ft Collins, Colorado.

“We are very excited about this first milestone delivery as part of our partnership with Bye Aerospace for their family of solar-powered StratoAirNet UAVs,” said Brad Clevenger, CEO of SolAero Technologies. “The combination of our advanced high-efficiency solar-cell technologies and integration expertise with the wide range of capabilities of the StratoAirNet UAV family will help usher in a new era of middle and high altitude commercial and defense atmospheric satellite applications.“

About Bye Aerospace:
Bye Aerospace, one of Colorado’s 2017 “Top 50 Companies to Watch,” is an innovator of sophisticated aerospace technology. The company, which was founded in 2007, is headquartered near Denver and brings advances in electric propulsion and design efficiencies to aerospace applications such as the StratoAirNet, Sun Flyer and Silent Falcon.

For more information, go to www.ByeAerospace.com