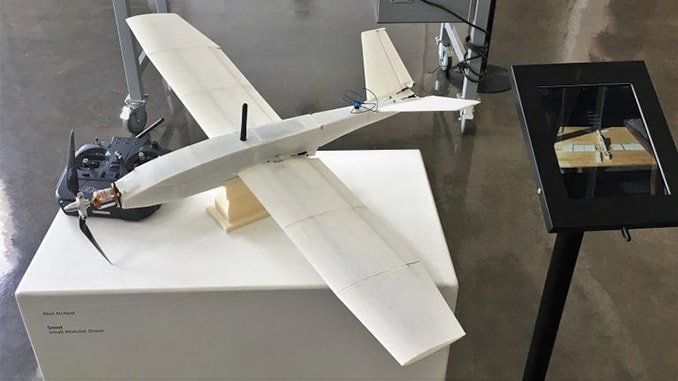 “We want the people using the products to drive innovation…” This may sound like the trope of a Silicon Valley evangelist, but it’s actually the goal for the U.S. Marine Corps’ Next Generation Logistics innovation group. NexLog, as the group is known, was established in 2015 to advocate for the future of emerging technologies on the front lines and for equipping Marines with the ability to make solutions for their own environment.

“The Marines have always been pushing innovation and have always had that forward-thinking mentality,” said Jennifer Walsh the Innovation Challenge Lead at the USMC headquarters in Washington D.C. In recent years, the Marine Corps has recognized the promise of additive manufacturing as central to the future of making things, and has disseminated 3D printers to units around the world and built full-blown maker spaces on a few select bases to help realize the capabilities of this technology.

“We want Marines to have the potential to use 3D printing or additive manufacturing to quickly go through the design process and make things possible,” said Walsh. And, given the opportunity, that is exactly what happened.

Enter Rhet McNeal, a 26 year-old Corporal from Griffin, Georgia, who saw problems with the Marines’ hand-launched fixed-wing drones, the RQ-11 Raven and the RQ-12 Wasp III. These small drones are typically outfitted with cameras for field surveillance or other light payloads. By military standards, Ravens and Wasps are relatively inexpensive, but at $35,000 and $49,000 per unit respectively, they still cost enough that very few Marines are authorized to fly them. More to the point, they require $100,000+ ground control systems and are sometimes tricky to launch. And failed launches (aka crashes) can mean expensive repairs.

McNeal, who holds a Bachelors in Aerospace Engineering from Georgia Tech, was confident he could make a 3D-printed drone with the surveillance capabilities Marines actually used with the Raven and Wasp but at a fraction of the cost.

“We have these drones that do a hundred things that make them cost between $35,000 and $50,000, but the soldiers normally only use the two or three big capabilities,” said McNeal. “I wanted to strip it down to what we actually use so that our drone does not cost so much we are afraid to use it – if you break it, not a big deal.”

And the Marines believed in him. Last year, “Adaptable and Affordable 3D Drones” – the proposal for a quick-assemble, transportable drone modeled after the Wasp but with easily printable 3D parts by McNeal (and a team of five other collaborators) – was one of 17 winning ideas selected from more than 300 submissions to NexLog’s 2016 Logistics Innovation Challenge.

“Every Marine has an assault pack that’s standard issue. I made my drone so it can snap apart into four parts and can fit into the pack,” said McNeal, who effectively acted as the team leader. “For somebody that has never messed with it before, it takes about two and a half minutes to assemble.”

Even more impressive, McNeal’s drone, nicknamed “Scout,” could be built for an astounding $613 with off-the-shelf electronics, 3D printer resin and controlled from the iPhone app Q Ground Control. A Scout drone system (2 drones, 1 control system) cost less than 0.5% of a $250,000 Wasp system!

As a winner of the Logistics Innovation Challenge, McNeal was given access to Penn State’s Applied Research Laboratory (ARL), a U.S. Navy University Affiliated Research Center, where he first began designing the drone and experimenting with 3D printing parts for the Scout’s wings.

But the big leap in the project’s development occurred while McNeal was at Autodesk’s Pier 9 technology center, a 27,000 square foot workshop outfitted with 3D printers, CNC machines, woodshop, metal shop – not to mention software and hardware experts in every field – located in San Francisco.

Late in 2016 McNeal got word from Captain Christopher Wood, the Marines’ co-lead for additive manufacturing, that there was an opening for a 4-month residency at Pier 9. Hoping to push his prototype forward, fine-tune his design in Inventor and Fusion 360, and work on fabrication challenges with Netfabb, McNeal began as a Pier 9 Resident in January of 2017. “Pier 9 is this great community to test ideas, for example, ‘this is the problem I’m having… it’s not really so much a problem, but something I think could be made better,’” said McNeal. “There is no way on earth the Scout would be as good as it is today if not for the great people and equipment I was able to work with on a daily basis at Pier 9.”

Having finished his residency and produced a functioning drone, McNeal is back on base in Camp Lejeune in Jacksonville, North Carolina. The design files and build specifications for the Scout have been handed off to The MITRE Corporation, which supplies and tests many of the Marines’ drones and will carry the Scout through the process of certification and hopefully wider-scale manufacturing. Summing up the purpose of the NexLog competition that brought McNeal’s drone to life, Innovation Challenge lead Walsh said, “We want Marines to know this is your project. We’ll connect you with the right engineers and technology to bring your idea to fruition.”

For many Marines, projects like McNeal’s demonstrate to them that their ideas will be heard and supported. For McNeal, it is time to return to training and service – and to finding problems he now knows can be solved with the support of the Marine Corps …and a 3D printer.