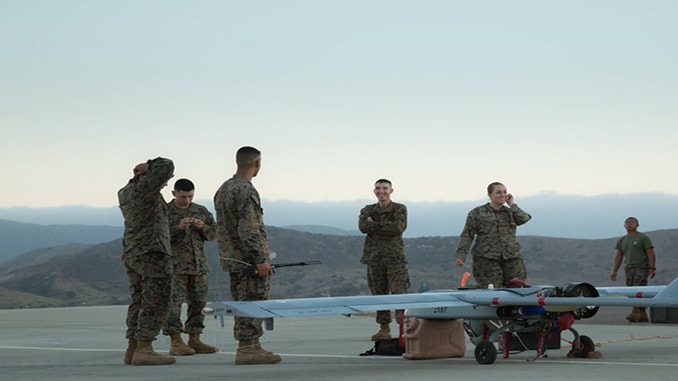 Unmanned Aerial Systems are able to track enemy movements no matter the terrain and provide Marines real time updates to enemy positions. But recently, the Marines of Marine Unmanned Aerial Vehicle Squadron 4, used their UASs for a more environmental purpose.

VMU-4 flew reconnaissance missions over a 40 kilometer area on Camp Pendleton. Instead of searching for insurgents or a runaway prisoner, they were counting the deer and bison population.

“Conducting a wildlife survey in support of Camp Pendleton Game Wardens was at first an unusual request,” said Gunnery Sgt. William Franceschini, the operations chief of VMU-4. “However, it turned out to be a great and unique training opportunity for our Marines.”

Prior to this year’s survey, CPGW hired off base helicopter contractors to conduct annual wildlife surveys to gain an estimate of the deer and bison population; an expensive and sometimes dangerous process.

After a helicopter struck a powerline during last year’s survey, CPGW decided to find a more effective and safer method of surveying the wildlife.

“Luckily no one was hurt,” said Peggy Boone, a biological science technician with CPGW. “But it was a good time to reevaluate how we conducted these surveys.”

VMU-4 exists to perform unmanned aerial reconnaissance and uses many different types of observation methods to fly reconnaissance missions in support of the Marine Air-Ground Task Force. Their mission is to act as the eyes in the sky for units that request their support.

“Transitioning into a more efficient and cost effective method of surveying wildlife, the Game Wardens asked VMU-4 to support them with an Unmanned Aircraft System,” said Capt. Shanna Ream, the operations officer of VMU-4.

UASs are able to fly at an elevation of 8,000 feet, stay in the air for nine hours and locate targets using multiple camera systems to better support and assist their day or nighttime operations.

“With the UASs able to fly at a much higher altitude than helicopters, it gives them a greater aerial view while also being safer,” said Boone.

VMU-4 conducted the survey at night and used infrared to count the deer and bison based off of their heat signature. The unit waited until night so that the animal’s heat signatures would show up better against the cooler landscape.

“Deer like to take cover in the shade of trees and shrubbery, making them difficult to see even during the day,” said Boone. “With the infrared cameras we’re able to see past that, allowing us to get a more accurate count.”

Conducting the survey allowed VMU-4 to get more practice with completing mission essential tasks, participate in a new, realistic training environment and providing CPGW a more efficient and cheaper method of counting wildlife.

“It’s a really cool opportunity because we actually had heat sensitive, living targets that moved around and hid in an environment instead of just notional targets,” said Franceschini. “We treated the survey as an actual reconnaissance mission by calling the wildlife enemy combatants, but everyone knew they were just deer and bison.”

The Camp Pendleton Game Wardens are still awaiting results from other surveying methods to cross check the results from the UASs. However, they are looking forward to working with VMU-4 again and hope to implement the use of UAS in future years.