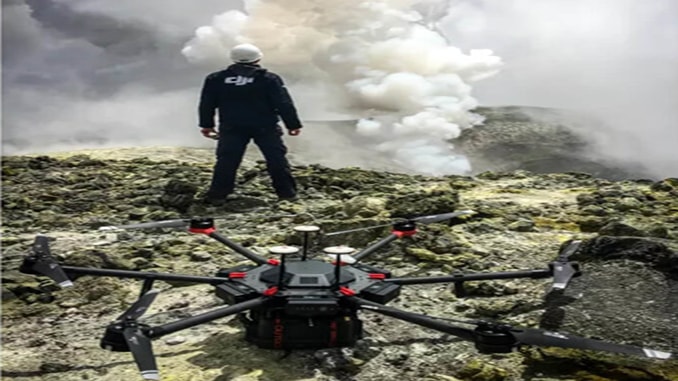 DJI, the world’s leader in civilian drones and aerial imaging technology, and the University of Mainz, Germany, have completed a ground-breaking mission for volcano research by collecting gas directly from the crater of Italy’s Mount Etna.

The scientists, led by volcanologist Prof. Jonathan Castro, took innovation in their field to an unprecedented level by using a DJI Inspire 1 with Zenmuse XT thermal camera to detect the crater’s temperature in combination with the DJI Matrice 600 Pro as a frame for a multi-gas measurement box to analyse gas composition and deformation from the air.

“With thousands of people living in the vicinity of volcanoes, we wanted to understand better how they behave,” said Prof. Castro. “Mount Etna has a long and frequent history of lava forming and eruptions. It’s a perfect natural laboratory, but one we need to analyse more thoroughly to protect the population in the area.”

The gas measurement box usedelectrochemical sensors with special detectors that captured the volcano’s vapours and provided an instant estimate of the gas concentration when the drone returned to the base camp.

The mission found that sulphur concentrations are much higher near vents, the cavities from which lava flows. In addition, the drone was able to sample solids that were forming due to sulphur reacting in the atmosphere with water and other components helping the scientists to better grasp the chemical evolution of volcanic gas plumes.

The 6-day expedition to Mount Etna, operating at more than 3000 meters above sea level, was a one-of-a kind experience for DJI and the University of Mainz. “Danger was always in the back of our minds,” said Yehonatan Richter, Film Director at DJI Studio Europe, “but we knew that we could deliver what our academic partners expected because our technology is most suited to this kind of challenge and safe to operate. Drones allow for faster and accurate data collection. They also help reduce exposure to hazardous working conditions.”

“The academic world is reacting positively and more institutions around the world are relying on drones in their quest to predict eruptions,” said Prof. Castro. “This brings us a step closer to potentially saving thousands of lives.”