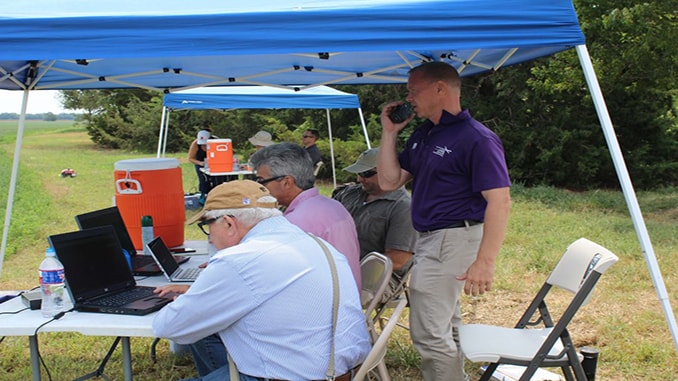 Kansas State Polytechnic and PrecisionHawk previously collaborated in summer 2016 on a series of controlled field experiments to observe pilots’ decision-making when flying in extended visual line of sight, or EVLOS. The studies were conducted to determine an acceptable safety level in response time of drone pilots when visually detecting a manned intruder in their airspace. As a result of this collaboration, PrecisionHawk was able to attain the only EVLOS waiver in the nation from the FAA for commercial unmanned aircraft operations.

This summer, PrecisionHawk asked Kansas State Polytechnic to participate in phase three of the Pathfinder program. Phase three is testing the reliability of technological aids when flying beyond visual line of sight, or BVLOS, and aims to provide an operational risk assessment to the FAA to help further define safety regulations for operating an unmanned aircraft in commercial airspace.

“This research is important for quantifying the risks associated with unmanned aircraft operations beyond visual line of sight of the operator,” said Andi Meyer, research program manager at the Applied Aviation Research Center. “Technological aids are needed for such operations, but they still need validation and reliability testing before the industry can move forward. This field-testing provides data for PrecisionHawk’s operational risk assessment that is a critical piece of the regulatory approval process.”

During the experiments, again taking place on Knopf farm in central Kansas, volunteers used computers with PrecisionHawk’s proprietary drone mapping software program, which provided a map view of where an unmanned aircraft was flying and monitored when and where the manned aircraft entered the airspace. The participants then used the software to survey the area and ultimately determine if an adjustment of the unmanned aircraft’s flight path was necessary to ensure safe operations.

When flying BVLOS, pilots are unable to visually see their unmanned aircraft. As part of the field test, PrecisionHawk used its traffic and conflict alerting system, LATAS, which provides unmanned tracking and displays ground and air obstacles in real time. In support of a drone safety solution, the MITRE Corp. developed a set of visual warnings to augment that display and aid pilot decision-making using the LATAS framework. The conflict alerting and display system allows pilots to maintain a well-clear area — keeping their flight path clear of other air traffic to avoid air-to-air collisions. Results of the field test will help inform requirements for such systems.

“Kansas State Polytechnic has an outstanding team in the UAS lab and because of our success in Pathfinder phase two, was my obvious choice to partner in phase three,” said Allison Ferguson, director of airspace research for PrecisionHawk. “Along with the data we are able to provide the FAA, this program also provides advantages to Kansas State Polytechnic students by exposing them to active research in the field.”

Phase three is the final phase of the FAA’s Pathfinder program. All results are provided to the FAA for consideration upon completion of field testing.

During the Pathfinder program’s field project, the Applied Aviation Research Center also hosted the MITRE Corp. in conducting small UAS noncooperative sensor field testing using low-cost sensors. These sensors are designed to be flown on small, unmanned aircraft to sense and avoid other aircraft. The center’s involvement in this live flight testing involved flying a manned Cessna 172 aircraft from Kansas State Polytechnic in a series of maneuvers near the unmanned aircraft’s mounted sensors. MITRE’s competitive data-collection exercise was designed to provide insights into a range of detect-and-avoid capabilities that could be useful for small UAS missions.

“Feedback from MITRE and the participating companies was terrific,” said Kurt Carraway, UAS executive director of the Applied Aviation Research Center. “We’re proud to be able to contribute to this exciting work, which we hope will ultimately help propel the UAS industry forward by introducing new technologies that enhance aviation safety to further promote the successful integration of UAS into the national airspace. We look forward to continuing this relationship with MITRE in conducting future tests.”

To inquire about UAS opportunities with Kansas State Polytechnic’s Applied Aviation Research Center, contact Carraway at 785-826-7170 or kcarraway@k-state.edu. For professional UAS training offerings, contact Kansas State Polytechnic’s professional education and outreach office at 785-826-2633 or profed@k-state.edu. To learn more about the UAS academic degree options, contact the campus’s admissions office at 785-826-2640 or polytechnic@k-state.edu. To connect with PrecisionHawk about its services and products or to learn more about the Pathfinder program, contact 844-328-5326 or info@precisionhawk.com. For questions about MITRE’s efforts, contact Matt DeGarmo at 703-983-7320 or degarmo@mitre.org.