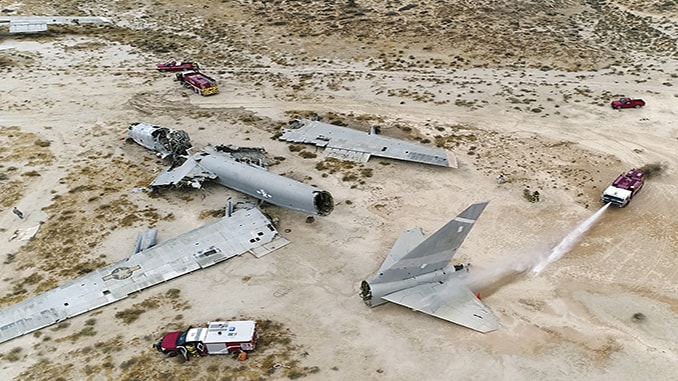 The exercise scenario allowed the Edwards Fire Department and the 812th Explosive Ordnance Disposal Flight to respond to a simulated crashed B-52 Stratofortress on Rogers Dry Lake.

The exercise was unique for the responders because they were able to approach an actual dismantled B-52 on the lakebed. The decommissioned B-52 served as an aerial photo calibration target and later a radar target.

The fire department was first on scene and immediately used firefighting tactics to extinguish the simulated fire and rescue aircraft crew members.

Concurrent with initial firefighting operations, the ETCTF was able to launch a sUAS that provided a live video feed to provide additional situational awareness for the incident commander. Additionally, it expedited the search for aircraft victims and explosive hazards, according to Lt. Col. Gregory Hammond, 812th CES commander.

When EOD members arrived on scene, they already knew the approximate location of the aircraft’s flares and it enabled them to render safe the aircraft faster than typical.

“The time savings provided by the sUAS would have enabled faster sortie generation if the crash had occurred on the active airfield,” said Hammond. “Moreover, during the response it supported a safer situational awareness.”

Overall, the exercise was a success, according to Hammond. At the tactical level, the firefighters enjoyed practicing a lakebed response that allowed them to set up on a visibly damaged aircraft. Similarly, the EOD technicians enjoyed the ability to hone their skills in a remote environment.

“At the operational level, the command element was able to try a new technology in order to improve their ability to respond safely to emergencies,” Hammond said.

As noted by Matt Guggemos, Edwards Fire Dept. assistant chief, “I believe sUASs will be the future of emergency response. It was a great experience to be at the forefront of this technology.”

The ETCTF was a core member of the response team as the 812th CES worked to innovate their operations to protect the future of flight at Edwards Air Force Base, said Hammond.