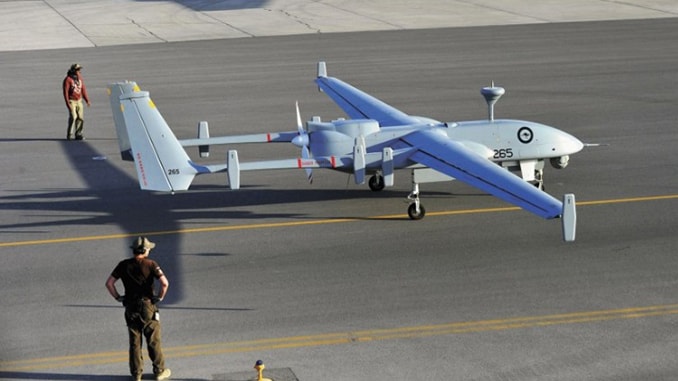 Australia has retired from service the Israel Aerospace Industries (IAI) Heron 1 unmanned aerial vehicle (UAV) that it has fielded since 2010.

The Royal Australian Air Force (RAAF) announced on 9 August that the medium-altitude long-endurance (MALE) UAV flew its final mission on 23 June, and that 5 Flight is to be officially disbanded at the end of the year.

The Australian Department of Defence (DoD) originally leased four Herons from Canadian firm MacDonald Dettwiler and Associates Ltd (MDA) for operations in Afghanistan, under the auspices of Operation ‘Slipper’ (three airframes served in-country, with the fourth being retained in Australia for training).

From January 2010 to November 2014, 5 Flight – operating as Task Unit 633.2.7 – provided intelligence, surveillance, and reconnaissance electronic warfare (ISREW) support to Australian forces and International Security Assistance Force (ISAF) partners in southern Afghanistan. “The aircraft has played a pivotal role in the air force’s ability to deliver air-land integration effects in support of our national security interests, including in Afghanistan, where it completed more than 27,000 mission hours,” the RAAF said.

Since the Afghan deployment, two Herons have continued to be utilized from RAAF Woomera, participating in military exercises and instructor courses.