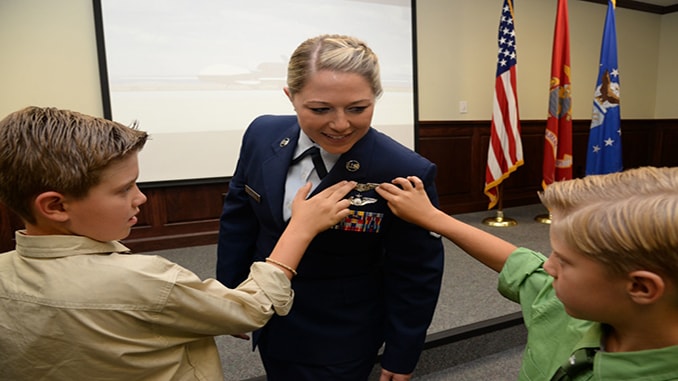 In its 70 years as a separate military service the Air Force has relied almost exclusively on commissioned officers to pilot its aircraft. In December, 2015 the Air Force announced that it would begin to include enlisted Airmen in its training to pilot RPAs. Twelve were selected and incorporated in the training program beginning in October, 2016. The first three EPIC students graduated from URT May 5, 2017.

“Tech. Sgt. Courtney doesn’t do this because she’s a girl, she just gets up every day and puts her uniform on and comes to work and kicks butt because that’s what she does,” said Maj. Natalie, an instructor pilot with the 558th Flying Training Squadron. “That’s who she is. She’s not a woman pilot, she’s a pilot.”

The 558th Flying Training Squadron is the sole source of undergraduate RPA training in the Air Force.

“It’s great to fill that role as the first female,” Courtney said. “It’s awesome and humbling, but our units don’t care if you’re male or female, they just want you to be a good pilot.”

In her 11-year career, the Vacaville, California native has been a part of the intelligence, surveillance and reconnaissance career field filling various roles such as imagery analyst and sensor operator for the MQ-1 Predator and the RQ-4 Global Hawk.

Undergraduate remotely piloted aircraft training is six months for RPA pilots, who sit in the left seat of an RPA control center during flight and six weeks for their sensor operators who sit in the right seat and control cameras mounted on the RPA.

“I’ve been sitting in the right seat for a long time, so now I’m ready to sit in the left seat,” Courtney said.