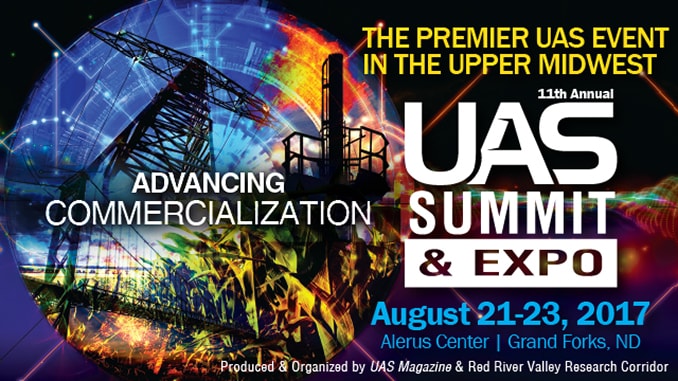 “The state of North Dakota remains one of the major industry hubs for commercial UAS activity,” says John Nelson, director of marketing and sales at UAS Magazine. “We expect the enthusiasm and excitement from last year’s event to carry over to the 2017 summit, because a lot of positive momentum was created and we’re seeing more companies joining the conversation within the state and region.”

The 2017 program will provide in-depth analysis and timely presentations from 40-plus speakers focused on the following for both small and large unmanned aircraft systems:

The Summit, taking place in what many have called the “Silicon Valley of Drones,” offers the most open airspace in the country, vast tracts of farmland, infrastructure to test on and the nation’s first unmanned aircraft degree program. Because of all the activity in the region, both UAS Magazine and the Red River Valley Research Corridor believe having the conference in North Dakota is the best location for an event like this. The location provides an outstanding opportunity for companies and policymakers to connect in a state that fully supports and invests in the UAS industry.

“The speakers assembled for this year’s UAS Summit will share new commercial opportunities and the latest technologies available in the UAS industry,” says Luke Geiver, program director and managing editor of UAS Magazine. “The sessions will also reveal future technologies and services that are the driving forces shaping new policy within the industry both in North Dakota and on a global scale.”