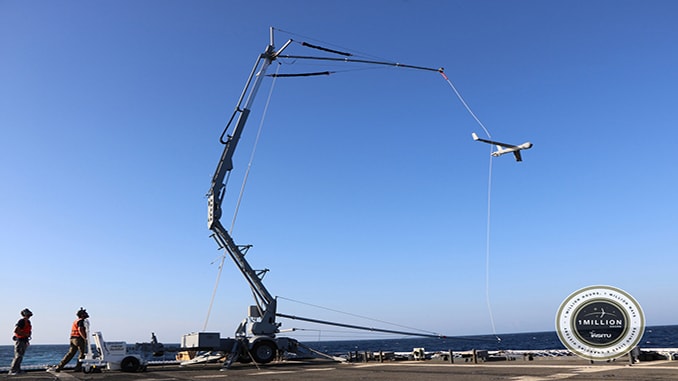 Insitu reached a milestone worth celebrating when the company’s unmanned platforms — ScanEagle, Integrator and RQ-21A Blackjack — hit a collective one million operational flight hours last week. This event represents the latest achievement in the company’s 23 years of professional aviation history.

“Insitu’s path to one million operational flight hours has been navigated by our why statement, which is ‘to pioneer and innovate in all that we do so we positively impact peoples’ lives and change the course of history,'” said Ryan M. Hartman, Insitu president and CEO. “Providing our customers with new tools to creatively solve old problems has inspired our culture since the beginning, and it continues to motivate the work we do every day. We’re proud to say that we are just as rewarded by our new successes and opportunities as we are inspired by the events that got us to this point — and I believe we are just getting started.”

Other milestones in the company’s history include:

Insitu will celebrate this and other news at a media briefing on August 2. Members of the press who would like to attend, please contact Jenny Beloy.

About Insitu
Insitu is an industry-leading provider of information for superior decision making. With offices in the U.S., U.K., and Australia, the company creates and supports unmanned systems and software technology that deliver end-to-end solutions for collecting, processing and understanding sensor data. We proudly serve the diverse needs of our global customers in the defense, government and commercial industries. To date, our systems have accumulated one million flight hours and 123,000 sorties. Insitu is a wholly owned subsidiary of The Boeing Company.