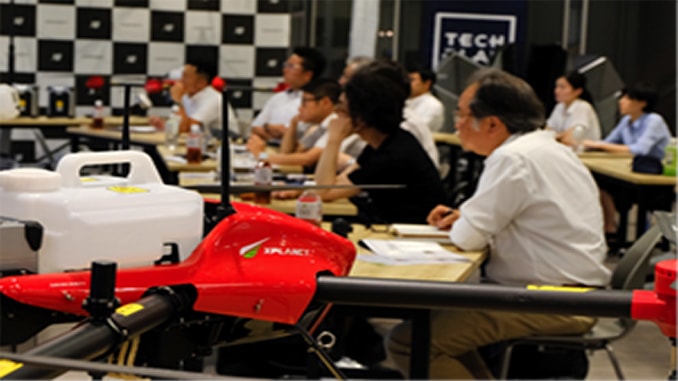 At the conference, President of XAIRCRAFT JAPAN, Mr. Tomohiro OSHIRO demonstrated the composition of the P20 plant protection system, and co-founder, Mr. Rui TANG, introduced the service framework, training and tech support namely XCare and XAcademy, as well as the business model of XAIRCRAFT Japan.

Japan is one of the first countries using large-scale UAV on plant protection in the world. Take rice as an example, ground vehicles spray about 22% (in 2014), and the proportion of UAV plant protection has reached 36%.

Although Japanese farmers had adopted quite a few technologies, they have to deal with the decreasing labor year after year, and the inevitable ageing population. Japan has a total of about 4.5 million hectares arable land (as in 2015), and about 2.09 million agricultural practitioners, of which more than half over the age of 65. At the same time, according to the official statistics, imported food has accounted for 60% of the Japanese total consumption.

To tackle with the huge impact of imported agricultural products along with the ageing of rural population, Japanese food producers need more intelligent, efficient and hands-free equipment to improve their efficiency.

XAIRCRAFT made the choice of Japan as its first step in the process of internationalization, it is hoped that its UAV Plant Protection System P20 can exert its technological value rapidly in Japan.

Justin GONG, co-founder and CMO of XAIRCRAFT, delivered a speech at the conference about XAIRCRAFT’s mission and expressed his confidence of entering the Japanese market. “XAIRCRAFT is an agricultural technology company with global vision. We choose to introduce relevant products to the country packed with formidable rivals, is because we are willing to examine XAIRCRAFT’s technology and business model as quickly as possible here. By lowering the threshold of UAV plant protection service, utilising autonomous flight control and dynamic spraying systems, more people will be benefit from precision farming. The mission of XAIRCRAFT is to continuously developing more efficient agricultural technology, in the context of reducing labor input and environmental pollution, ultimately contribute to the sustainable development of global agriculture.” 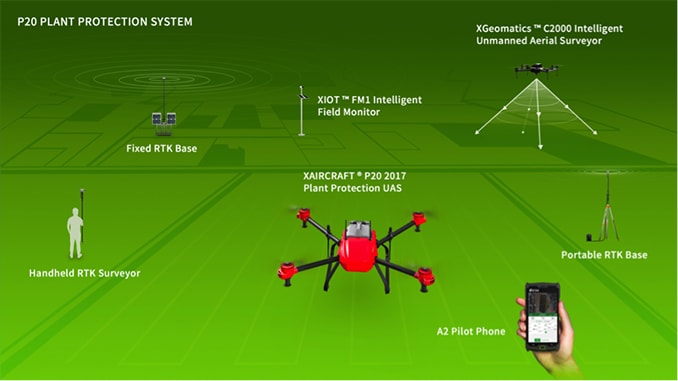 Meanwhile, facing the global appeal about food safety, every country begins to explore the “precision agriculture” solution, hoping to solve the problem from the refinement of farming tools and management.  The core concept of XAIRCRAFT is exactly rooted in “precision agriculture”. Collaborative research project “XPLANET” were launched with dozens of research institutions in China, Australia, the United States, UK and other places, for P20 to improve and adapt to different planting environment.

Global Consultant of XAIRCRAFT, Fellow of the Royal Society of New Zealand, Dr. John Troughton said, “ ‘precision agriculture’ is not just a privilege for large-scale cultivation. Most world food is produced on small lots. There are a variety of significant food crops that need spraying of or for defoliant, weeds, disease, fertilizer, insecticide and growth regulators and how to service small plots of crops is of great international food security significance.” Dr. Troughton has worked extensively in agricultural science and has been involved in projects such as the United Nations Global Energy Use and Amazon Forest Research. He said, “Automated, efficient and accurate plant protection UAV systems can ensure that small plots won’t have the abuse of chemicals, missed sprays, missed the best time to spray and other issues that reduce food yield”

The implementation of “precision agriculture” relies on comprehensive monitoring and efficient mining of field data. Sensors and cloud-based computing power are now being used by large farms around the world, to collect data and obtain specific plant protection plans, so that in the future drones and robots can manage our farms.

XAIRCRAFT said, with the development of precision-agriculture-related technology such as UAV, IOT and Block Chain, producers and consumers will be able to achieve a comprehensive traceability of food production with in a few years. Global agriculture production as a whole will be refined and become transparent. Food safety threats and consumer trust crisis will be completely resolved because of these technologies.